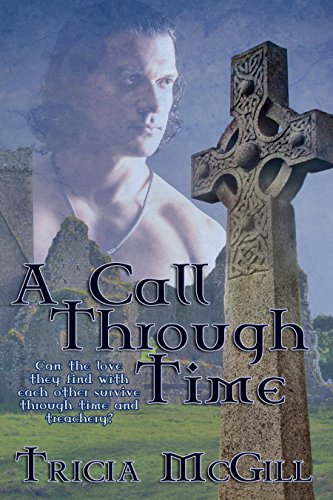 Book: A Call Through Time by Tricia McGill

about this book: This book began its life with one scene in my mind. A man wakes up in a cave to find himself miles away from his home and in a very strange world. All stories have to start somewhere of course, but I needed to know who this man was and why did he happen to wake up in 450AD. Set in Britain as it was way back then, my next step was to establish his reason for waking up in just the place he had been dreaming about for a long time and what was his reason for being there.

• "Ms. Mc Gill is at her best describing the settings and making us feel as if we're in ancient times, with the good and the bad – the deep forest and roman villages, the clothes and food are all brought to life for the reader. Interwoven with treachery and violence, the magic of the Celts, shape shifters and the old songs and legends, this story will sweep you into another time - one that you won't want to leave!"
— Reviewed by Jennifer Macaire for Wordweaving and MidWest Book review

• "….It is a fascinating read, with its history of England as it was after the Romans had departed. The characters are wonderful, and I had no trouble believing I had been spirited to the distant past with these people."
— Sensuality rating: Mildly sensual Reviewer: Judy Cook