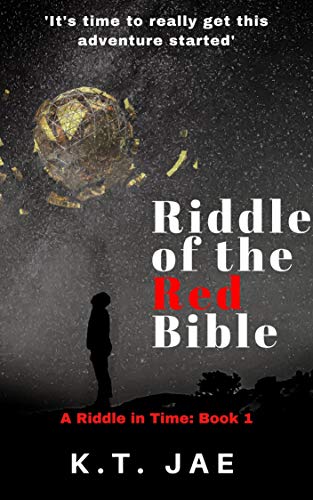 Book Reviews: Riddle of the Red Bible (A Riddle in Time) by K.T. Jae

about this book: Riddle of the Red Bible is about a young half English, half Filipino girl called Courtney Nivots, who experiences a terrifying encounter with what appears to be a disturbed spirit in her bedroom when she is five years old. After the ghost ends up smashing a figurine of Jesus that was passed down to her by her father who died just before she was born, she decides from that moment on to devote her life to the study of science to find out if time travel could ever be possible. She is incredibly advanced for her age academically, so spurred on by her love of the idea of travelling through time but slowed down by her poor and unfortunate circumstances and the ridicule of those around her, she becomes convinced that it's her destiny to find out who or what visited her. By going back in time to that day, she can see it with the eyes of an adult and find out who it was and why it wanted to deliberately severe the only tangible link with her deceased father.

So Courtney sets off on a massive journey of discovery that takes her from the U.K. To the U.S.A and even to Manila, to not only find out the truth about who her visitor was, but also find out who she is and what part she has to play in the future of the world; experiencing many things most teenagers face for the first time along the way; lack of parental support, first boyfriend, catfighting with the 'it' girls in school etc.

Riddle is a fun and exciting time travel/ghost story that will force you to question who we are, where we came from and what our futures may hold; delving into what it would really mean to the human race if time travel is actually discovered as being possible one day. The story always remains fun and exciting but challenges you at the same time.

I've always been fascinated by the idea that scientists are actually trying to discover time travel as we speak, but as much as I love the idea of travelling through time, I can't help but wonder if that would really be a good idea? That's my dilemma and what the story idea stems from. I have tried as much as possible to always stay as much on the side of reality as is possible and follows a theory that past, present and future are all running simultaneously and as the lead female says 'In one year's time from now, you will catch up with your future self and realise that today is now the past. What you just don't realise, is that your future self is already there and looking back at today as a memory.'

It is a time travel/ghost story that takes you on an adventure but always makes you believe that what happens could one day be possible.

I wrote Glow after many years growing up as a child being fascinated with time travel, but never thinking I would ever be able to come up with a unique take on it that nobody has seen before. I started writing with a good friend who became my writing partner and we wrote three screenplays together. We had two of the optioned to be made but after years of going backwards and forwards they both crumbled away; mainly due to finances being unavailable. We never wrote anything that would be considered to be big budget but with the lack of funds in Britain for movies, even our small ideas became expensive. Then the day arrived and what I thought would never happen, did. I was struck with a fully formed idea for a story as I was coming out of the bathroom (much like Doc Brown from Back to The Future) A story that involved time travel and ghosts and merged them together creating a new philosophy on time travel. So spurred on by the fact that many had said my writing would suit a novel, I decided to do just that and Riddle was born. I had the frame and just needed to fill in the gaps, so using influences from my own life, I set about creating characters and scenarios.

Finally, I wanted to place both my daughters in the thick of the action, so combining both their personalities, I amalgamated the two of them and using a name that was on the shortlist of baby names I created a character called Courtney who would become the heroine of the story. Watching them grow, inspired me to put much of what they've given me over the years, through the laughter, the tears and the triumphs over their adversities, into a story that people of all ages could pick up, identify with, but most of all be sucked into and go on a wild and fantastical adventure with; one that lets you believe that you can achieve anything. The children gave so much to me as a person, allowing me their parent to be the person at home with them, that I ultimately wanted to give something back to them and every other child in the world who is missing a parent, be it through death like my eldest, or simply through the circumstances of being a modern parent in this stressful age, much like my own. I couldn't allow myself to become my eldest daughter's parent, only to be away at work for most of her childhood and only seeing her at weekends. If I was going to be her parent I had to really be there for her. So even if I don't have much, I do have my daughters in mind, body and soul and so I give this book to them and all sons and daughters, as a gift from parent to child, no matter how old they are; to inspire them, but most of all, to put a smile on their face and entertain.

Not your typical Scifi Novel

Courtney Nivots, the lead protagonist of the book titled: Riddle of the Red Bible is certainly not a typical half English-half Filipino girl – she is in fact the precise opposite. As described in the story; even at the young age of five, she could already formulate creative ideas that would enable her to travel to the past – a feat that shows her intelligence as compared to other girls her age. To top it off, Courtney claims that she could see "ghosts", an ability that caused her so much pain and has left a lasting impression thus dictated her actions throughout the story.

K.T. Jae, the author of the book, was without a doubt successful in creating a female protagonist who had so much depth and description. Any reader who has read the story will surely agree that Courtney is so detailed – she could leap off the book. She is very tangible to the reader; this what makes Courtney distinct from other fiction heroines.

Relatively, the author was truly daring and creative by not confining the whole story in a single setting. The whole plot explores different locations therefore challenging the imagination to produce diverse images. The ultimate single word description of the Riddle of the Red Bible should be "daring" because it broke story stereotypes and was successful in combining the unique yet powerful theory of time travel and the existence of ghost. [by Katie]

A must read Sci-fi and Adventure novel

This book reminds me of the 1984 movie, The Terminator, in which a robot assassin time travels from the future to try to change the world. I was in grade school when this movie was shown and no one expected it to become such a huge success. Not only because it starred Arnold Schwarzenegger but combining time travel and robots was a completely fresh idea at that time.

Today, Riddle of the Red Bible makes the same impression on the readers and I highly recommend this book to readers of my age or generation who love an adventure and sci-fi novel that's really worth their time. [by Samuel]

Exciting and Interesting to Read

The Riddle of the Red Bible is an exciting book and speaking of adventure, I think it has the same appeal as a Harry Potter movie. As a sci-fi adventure novel, it has very unique twists and turns in the story - even its ending is surprising.

K.T. Jae, the author of the book, has written a convincing novel that leaves a reader asking what would really happen if time travel is possible. More than the story of a British teenager, Courtney, it is also a story on family, love, horror, fantasy, and success in life.

If you haven't read this exciting time travel novel, get a copy now. I'm pretty sure you'll enjoy it as much as I did, especially if you love adventure, sci-fi and horror stories. [by Angela B.]

Riddle of the Red Book is about the adventures of Courtney Nivots, 15-year old half English, half Filipina girl who took the ambitious journey to become the first person to travel through time. Apparently a geek and whiz kid, Courtney loved doing time travel theories as a hobby since she was five but this turned into a serious dream when she encountered a violent spirit, as she puts it, in her bedroom, who smashed into pieces the only tangible thing left to connect her with her lost and unseen father.

Driven by this personal quest and seemingly haunted by her past to seek her true identity, she courageously flew from her home country, U.K. off to the U.S.A.. Along the way, she encountered more challenges, met different people, yet remained high spirited and strongly determined to prove her belief that travelling through time as a real possibility for the future. The chapters of the book introduces the readers to the fascinating science of time travel, the principles behind it, and the notions buzzing around it, unraveled through the life of a smart, fearless teenage girl.

Moreover, flipping through the pages also throws out mind moving questions such as: What can you do to use time to your advantage? If we could travel back to our past and change things to work more for our favor, would we? Why don't we make the right decisions today? That way we wouldn't have to come back and change anything? Essentially, the book opens our senses to ponder how we live our life and what determines our future. Do we have to live within the shadows of our past or do we live our life in the present?