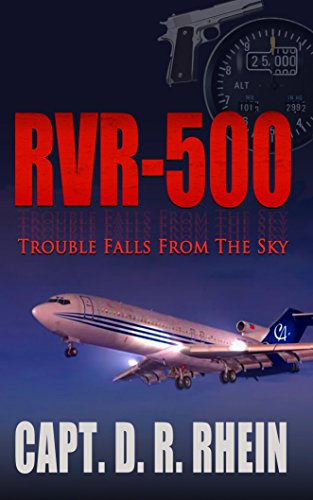 about this book: With a career in flying corporate jets all over the world, Capt. Rhein took of one the leading aviation crashes and used it as the foundation for RVR-500. A sudden winter storm hits Ohio causing blinding fog and sleet. When an airplane dives into the runway, the drama begins as the NTSB team, led by Phil Ryan, investigate the details. Working in the snow and ice, each discovery leads to another so within days a twisted plot, hidden by the airline, begins to unravel. Can Phil hold his team together as pressure from the airline tries to persuade NTSB that 'bad weather' is the culprit?

When Phil's work partner gets killed while following a lead, Phil knows his instincts are right – the airline is hiding something! Of course, now the FBI is involved with the death of a federal employee.

Just as Phil calls in every favor he's owed to collect evidence, he discovers that his own boss is interfering with the investigation as well. How deeply engrained is this plot?