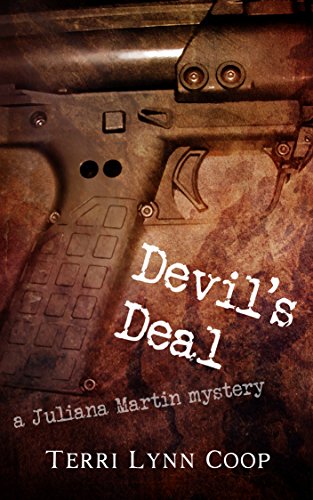 about this book: Devil's Deal came out of a discussion at a bar in Houston after a writers convention. The question was, "What if Jack Reacher was a woman who used her legal wiles (and a shotgun) to solve problems?"

Toss in a RICO indictment, a trumped-up murder charge, a camper, a Chihuahua named Simon, and Devil's Deal was born.

Juliana Martin is a high-dollar, high-stakes attorney with her father's Dallas silk stocking law firm. It's all big cases and shady deals until she shows up to find the firm has been raided by the feds and her dad is in jail. With one flip of a warrant, her tidy life is in shambles and she's on the run. When the cops finally catch up with her, they offer an impossible deal. She can violate everything she believes in by betraying a client or she can watch her father get a needle in his arm for a murder he didn't commit.

Special Agent Ethan Price has one goal: to put the Lone Star state permanently in his rear view mirror. On the surface, this assignment seems tailor-made. All he has to do is team up with the hotshot attorney and use his charm and good looks to find out what's behind the steel wall of legal privilege surrounding The Martin Law Firm. Pull it off and a promotion and transfer are his for the asking. The problem is that the profilers miscalculated. They didn't consider that the woman he is "perfect" for might also be perfect for him.

Undercover and off-the-grid, Ethan and Juliana are betrayed. Unable to trust anyone, including the task force that sent them, they call her criminal clients for help. In Juliana's world, money is cheap, but favors are gold.

Devil's Deal doesn't slow down for a moment. From a high-rise in Dallas to a trailer park in south Texas, to a beer-sodden dive in Austin, Juliana Martin doesn't just look for trouble, she welcomes it.

I dug deep into my own legal experience to create the character of Juliana. Add in a long drive through Texas in my camper and peppering my friends with questions about high-powered esoteric weapons (*ducks into co-worker's office* "Hey, what kind of shotgun shell can penetrate an engine block?" *answer* "Thanks!") and Devil's Deal is an old school thrill ride.

My research paid off. Under its original working title of Pro Hac Vice, this book won the 2013 Claymore Award for best unpublished novel at the Killer Nashville writers conference.