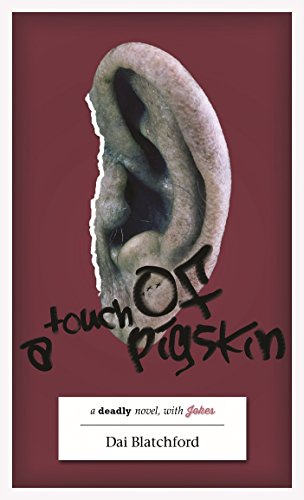 Book: A Touch of Pigskin by Dai Blatchford

about this book: A Touch of Pigskin is a dark and brilliant surreal thriller that is best described as an extended version of Inspector Morse as if written by Monty Python. Dai Blatchford has created a glittering, fantastical, cunningly contrived comic novel that leads the reader down a labyrinth of fear and dread.

Piers Prideaux’s promising career at an Oxford College is brought to an abrupt end following the intervention of a new master, one Sebastian Slope. It is not quite as simple as that, matters in Oxford never are. In defending himself Prideaux is directly responsible for Slope being sacked, arrested and jailed for fraud. Years later Slope returns to Oxford and it becomes clear that he is bent on revenge.

Slope is the leader of a group of dangerous men who are descended from an ancient Cornish secret society known as the Spriggans. Prideaux is forced to go on the run with his oldest best friend William Radleigh de Beaune, aka Billy Bones, an aristocrat fallen on hard times. As Slope pursues his deadly obsession anyone associated with Bones and Prideaux is in great danger. Pigskin is a wise, quite surreal, philosophical meditation on the business of living, but with a witty and whimsical undercurrent, full of oddball characters and even odder secret societies.

‘A Touch of Pigskin is a first novel not only of tremendous promise, but also of achievement, a minor masterpiece…a mighty imagination has arrived on the scene’
Literary Journal

‘A brilliant book, barmy and barnacled with the grotesque…Blatchford’s the kind of writer who makes you want to nag your friends until they read him so that they share the pleasure’
Goodreads.com

Video: A Touch of Pigskin by Dai Blatchford