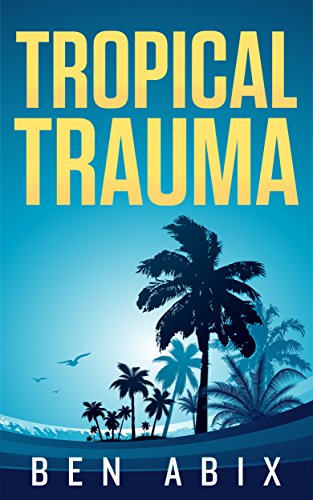 about this book: Tropical Trauma takes you on a journey from a boys innocent life within a dysfunctional family, to a man. After Mitchell Browner finds himself waking up in a hospital from a tragic fall accident, he seemingly can't remember much of anything. As he struggles to maintain normalcy inside his childhood, the craziness within his family heightens.

During his adolescence, he experiments with drugs, alcohol, and eventually finds himself with the girl of his dreams. As his life continues past high school, he finds himself seeking out the life of a prestigious doctor in Miami's glitzy tropical landscape. With his luck going from bad to worse, he's then forced to suspend his physician aspirations at the University of Miami, and attempt to right all the wrongs that have been committed against him.

As he continues to spiral downward, he maintains his focus and resorts to uniquely violent acts that are seemingly so intricate, his forensic imprints on his crime scenes are virtually nonexistent. Through massive twists and turns thereafter, Mitchell is pushed to the farthest limits of his own mind and has to decide whether continuing down his vengeful path of destruction is worth it, or would he be better served on turning his back to the various evils that have tried to destroy his life altogether?

What are the benefits of reading Tropical Trauma? Tropical Trauma is built to entertain from beginning to end! It takes the reader from a young boys perspective to an adult mans perspective and follows his regression in detail due to his poor luck that never seems to cease.

Who are the primary readers for Tropical Trauma? Anyone who is eighteen and older; as this book isn't for the faint of heart. It's a 'no holds bar; take no prisoners' novel that's truly intense, to say the least.

How long did it take to write? Around six months (with a short vacation to Florida sandwiched in between).

How did I come up with the title? The title Tropical Trauma really fit this book perfectly as it's set in Florida and delivers the reader to various other tropical locations around the world. In addition, Mitchell's aspirations to be a physician lend to the Trauma portion of the name as well.

Why did I choose this cover? The cover art is truly beautiful and combined with the impactful yellow font; it was really a 'no brainer'.

What was the hardest part of writing Tropical Trauma? It was my first book ever; that in and of itself was difficult. However, the graphic/intense scenes and the psychological distress aspects of this were challenging at times to write. Following Mitchell Browner's craziness from beginning to end though was really a treat nonetheless.

Did I do reasearch for Tropical Trauma? I did a lot of dictionary research but didn't do a lot of internet research for whatever reason.

Did I learn anything from writing the book? I did. I learned that when all the chips are down, people will resort to 'damn near anything' to revive and restore themselves; and whatever they deem necessary is what they'll do.

What do I want to say to my readers? From the first time I sat down to write, I wanted to express the most compelling content to my readers as humanly possible. I've never been one who wants to write just for the sake of writing; it's all about fully impacting the reader on a whole new reading level and intimately taking that same journey with them with every subsequent word.