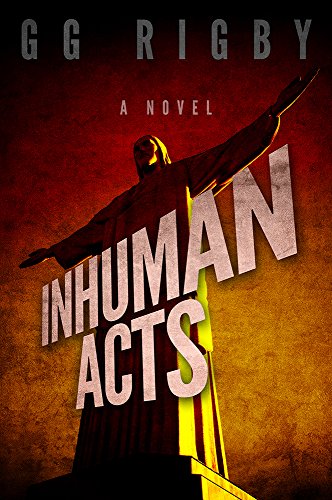 about this book: In Rio De Janeiro some children are being murdered, others disappearing never to be seen again. The story centres around three disparate groups. Two of Brazil's street children, an ex-American marine pilot doing whatever is needed to keep his plane flying and the money rolling in, and some people who are committing inhuman acts in order to get rich.

In fact, the actions of the characters allowed the title to chose itself.

This novel would, I think, appeal to the more mature reader. One who can understand the hopeless situation, the pain and fear that children forced to live rough must endure – as must Ruiz aged nine and Christiano who is five – in order to stay alive.

I wrote Inhuman Acts after reading about a shooting in Sao Paulo some years ago in which several people were murdered by the police, most of them shot in the back and several with multiple bullet holes in their bodies.

I now have six novels on Kindle and none of them were easy to write. I don't get writer's block, but building characters, selecting and re-selecting the names because they don't fit is sometimes exasperating because at first they seem okay, but as the story progresses I start to think I must have a stronger name or one with less power and I frequently change the names, sometimes ending up with the one I started with.

The cover, I think, epitomises Rio. The entire world knows it. It can't be mistaken for anywhere else. It is an icon and therefore must draw people's attention. The fact that the statue represents Jesus gathering the children of the world to Him brings much poignancy to the story.

I did massif research for Inhuman Acts because Dan Buckner, the American pilot, flies all over Brazil carrying illegal cargo. I had to get as close to the truth as possible in order to make the story credible. I want my readers to enjoy my work as fiction, but believe it could happen.