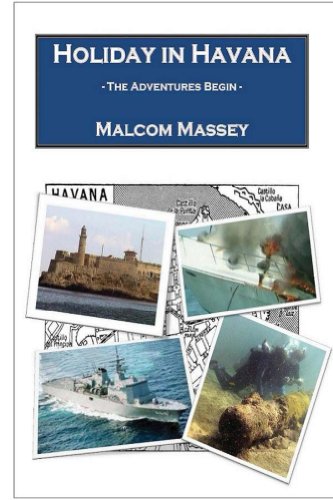 about this book: This novel represents the beginning of The Martin Culver Series. When Martin Culver finds out that his father and his brother have been lost at sea near Cape Hatteras, he begins to ask questions that lead to unexpected adventures.

As the search for the missing men begins between the "Graveyard of the Atlantic" and the Bermuda Triangle, Martin begins to put his own plan together for finding them. When the search is called off, and those responsible stonewall his efforts, Martin enlists the help of friends who own boats and know the local waters.

What ultimately happens surprises everyone involved, since the missing men have been picked up by a Cuban vessel sailing under cover of night and fog, and taken to Havana.

This novel offers exciting adventure woven into the idea of what everyday heroes do when no one else turns a deaf ear to a dangerous situation. Readers will not want to put it down, and will recognize the global and local conflicts between Russia, Chechnya, Cuba and the United States that can often affect people right where they live.

I was inspired to write this novel by several factors: a great neighbor from Cuba when I was growing up, who used to drink coffee with my dad while I operated the grinder and listened to Cuban records, along with this question. How far would you go to rescue your friends, even if no one else was willing to help you?

The cover of this novel represents the desk of a CIA operative who is analyzing different aspects of this story in order to figure out from which angle to attack the problem.

I did a lot of research. For one thing, I had not been to Cuba, but I did find related elements while living in Costa Rica for a year. I also had to research American, Russian and Cuban naval vessels; CIA locations, procedures and protocols; Donzi-type speed boats; Cold War-era weapons systems; the history and terrain of Chechnya and Cuba; as well as nearly everything to do with scuba diving, treasure hunting, underwater archaeology and the history of Spanish treasure.

In writing this first novel, I learned that I really like to entertain people by writing, and that I have something to say that people find interesting. After 10 years of people asking for the sequel I wrote "The Lost Ark of the Incas", the second novel in the series.

To my readers I would say "Thank You" first and foremost. With that thought, I would also say that The Martin Culver Series of action adventure novels

Video 1: Holiday in Havana - The Adventures Begin by Malcom Massey
Video 2: The Golden Treasure of Panama