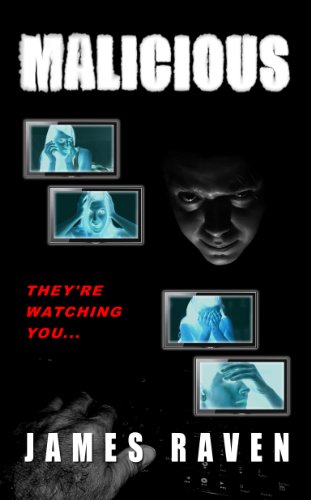 about this book: I'm not a computer hacker and until last year I knew very little about the subject. I'm an established author who writes thrillers.

Then early in 2013 I came across a newspaper report about a woman whose webcam had been hacked. The man responsible had spied on her for some weeks and had managed to record her in compromising positions in her bedroom.

This aroused my interest so I researched the subject thoroughly. I was both amazed and appalled at what I discovered. I had no idea that webcam hacking was so widespread or that more and more of the hackers were resorting to blackmailing their victims. It prompted me to start developing a story and a cast of characters.

The result is my eighth thriller called MALICIOUS. The book focuses on a female detective based in Houston, Texas who becomes a victim of a hacker calling himself the Slave Master. My story is pure fiction, but I now know that this sort of thing is going on across the world on an alarming scale. Mature women and young girls are falling victim because they're not aware of the problem.

I chose Malicious as the title because hackers gain control of webcams using malicious software that their victims download without knowing.

I'm hoping my book will be of interest to a wide readership, but in particular those who spend a lot of time sitting in front of their computers.

Amazon review: 'Anyone who thinks it's safe to use the internet should read this book.'

I am also the author of After the Execution, Rollover, Stark Warning, Red Blitz, Arctic Blood and Brutal Revenge. My next book - to be published by Robert Hale next year - is called RANDOM TARGETS.