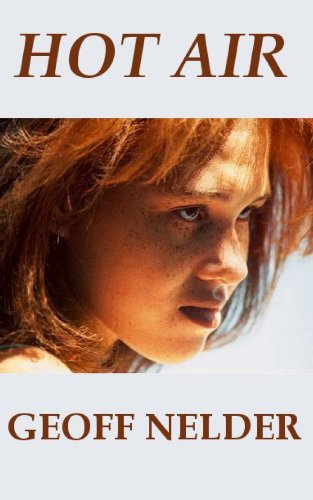 about this book: HOT AIR is a Mediterranean thriller for which I was arrested, twice, won a silver, then a gold award and published in the Netherlands and the USA. Arrested? I'll come to that.

I laid on the grass in a field in England one summer's day and saw a hot air balloon drift over me. My warped mind took to wondering how one would shoot down a hot air balloon. It's not gas – umm. And so started HOT AIR when a feisty redhead enjoys her aerial birthday present from her boyfriend. Trouble bubbled up when they floated over a suburban garden in the quintessentially English city of Bath and witnessed a crime. The gang shot at them while chasing interweaving on the roads with the official balloon chase car. Our girl becomes captured and holed up in a medieval watchtower on the Mediterranean island of Mallorca. Ironic since the towers were built by the police to look out for pirates but in HOT AIR are used by villains to look out for police. Her escape and chase, living on her wits and needing to become as dastardly as the criminals is what makes this novel as feisty as the woman.

The watchtowers on Mallorca are made of limestone but I didn't know that until I field tripped there. Unfortunately the tower I studied was surrounded by a new fence. After sneaking in, I was arrested. Seems the hilltop is owned by Claudia Schiffer to prevent the paparazzi using their zoom lenses on her bikini in the bay below.

HOT AIR won prizes from a Dutch Arts Academy for best unpublished novel. Marvellous presentations and festival in Groningen followed but now the novel is a Kindle gem published by Adventure Books of Seattle.