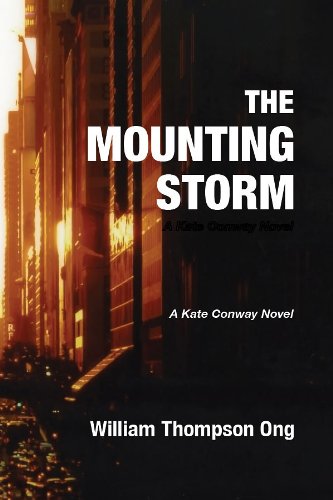 about this book: THE MOUNTING STORM was the very first of my Kate Conway novels. When I wrote it I had no thoughts about it becoming a series--a trilogy, in fact, as it now stands. I had in mind a sweeping novel that would begin in Nazi Germany and wind up taking a hard look at politics in the United States today. Kate was a minor figure.

The manuscript caught on with my readers and an agent recommended I turn it into a series. In doing this I cut 90 pages and some 30,000 words from the original, It now became Kate's novel with far fewer flashbacks. The pace of the story picked up a lot of momentum.

The idea for Kate came to me because I was a big fan of thrillers but was sick and tired of the traditional all-male cast of major characters. I wanted a woman to rise into the role and I didn't want her novels to be timid about sex. I gave Kate flaming red hair, a terrific figure, fetching green eyes--a real temptress, even down to the freckles that made her so self conscious. But I made her actually afraid of sex. All her encounters are originally by accident, stumbling her way into the mad embrace of a movie star or some other handsome hulk.