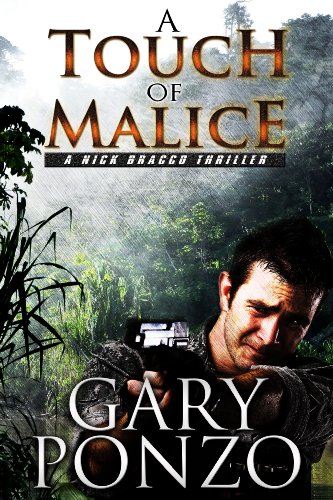 Book: A Touch of Malice (A Nick Bracco Thriller) by Gary Ponzo

about this book: While filming a documentary about the native Indians, the President's brother is taken hostage in the Amazon Rainforest by a Columbian Cartel. The President decides to call the only person who can help: FBI agent Nick Bracco. Why Nick? Because his cousin,Tommy, is in the Mafia and has underground contacts around the world.

Tommy uses one of his contacts to discover the whereabouts of the Cartel's camp where they're keeping the President's brother and here is where the problems arise. One problem is, they need to keep the rescue mission completely undercover. The other problem? Tommy has recruited a Russian assassin to help with the mission.

The President has issued an anything-goes attitude when it comes to saving his little brother, but he gets more than he bargained for when the Russian assassin seems to have his own agenda. The rollercoaster finally comes off the track and everyone appears to be a target. Nick Bracco has put everyone in jeopardy--especially the President's brother.

Video: A Touch of Malice (A Nick Bracco Thriller) by Gary Ponzo