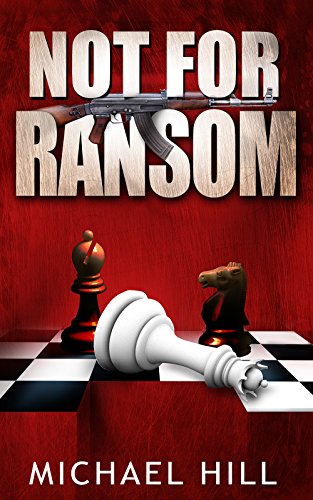 Book: NOT FOR RANSOM by Michael Hill

about this book: Some while ago I was sat alone in the dining room of an hotel looking through the window into the outside darkness letting my mind wander, and as one so often does, started a 'what if?' From that moment, with the imagining of robbers bursting through the door into the hotel, arose the idea for my thriller, 'Not For Ransom.'

And of course, like Topsy - anyone know who Topsy is/was? - it grew and grew into the KIndle e-book it is now. Mind you its been a long journey which at times I thought would never be attained. Not just the actual writing, but dealing with how(amazingly) it evolved, and took on a life of its own. In the end it surprised me ... as is so often the case with us writers. Where did it come from?

For instance in the beginning it was going to be simple robbers arriving in their cars from a nearby burg to rob the supposed wealthy guests at the hotel. A bit commonplace I thought. Then it was going to be escaped convicts from the nearby prison. Been done. Anyone seen Key Lago? Good film with Bogy et al. So what if a film star or worse, tv personality staying there? Who would care? Big up the villains.,. terrorists! Now all sorts of motives and mayhem can come into play. So Who could they capture to create massive interest? politician. Yawn.Important politician? Possibly. Have to be a Cabinet member but even then it would just open a job opportunity for a rival. The idea I eventually just about settled on was the US President and the British Prime Minister, old college budies meeting for a reunion and a bit of off the cuff real politique but it was too over the top. And then ...

The US First Lady staying at a nearby hotel with friends is captured by a very disparate bunch of terrorists who break out from the nearby prison. Surviving guests and staff rally round while govt forces are held in a stand-off. Do they succeed? Who survives? At what price? That easy. Very reasonable on Kindle.