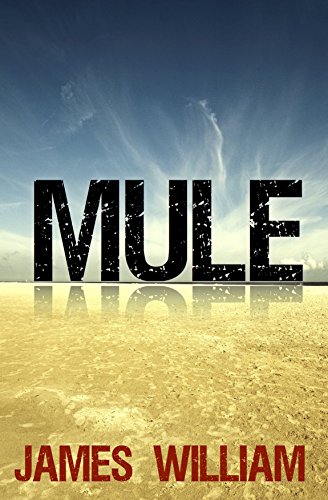 about this book: Mule (noun) slang: A person who is paid to transport illegal drugs for a dealer.

MULE is a harrowing thriller about the drug and gun trade between Mexico and Texas. It centres primarily around Cole Reed, a young Texan boy whom works for the Mexican cartels. His job is to run cars across the empty desert plains where he then exchanges the contraband with a similar mule on the other side of the border.

Except one day, Cole's recently retired neighbour joins him on a ride and it all goes terribly wrong. In the ongoing war between the borders and as act of brutal vengeance upon the cartels on the Texan side of the border, Cole is killed and Hal barely makes it out of the desert alive, severely injured and a hot target for the cartels on both sides of the Rio Grande...

The DEA get involved in the case and as MULE reaches its intense cat-and-mouse climax, Hal struggles to keep out of the line of fire and tries even harder to avoid his inevitable ultimatum with the cartels...

Heavily inspired by violent movies by the likes of Quentin Tarantino and by gripping television shows such as Breaking Bad, MULE engages the reader on a level no novel has done before. The suspense is (at times) unbearable and the violence and the brutality is at times sickening. The novel very much plays out like a movie or an episode of a television show, flicking between scenes and points of view to distance the reader when necessary and at times, pull them in close to the action when needed.

"Tension and suspense in a novel should be like an elastic band, it should keep stretching and stretching, all the way to the very end until it reaches its absolute momentum and it snaps!"

MULE took me just under a year to write. I spent a lot of time between 2011 and 2013 in the USA and I knew that my first novel had to take place in the wastelands of West Texas. I am a huge fan of old westerns and the desert plains of America inspire me in ways that no city or jungle or beach ever can.