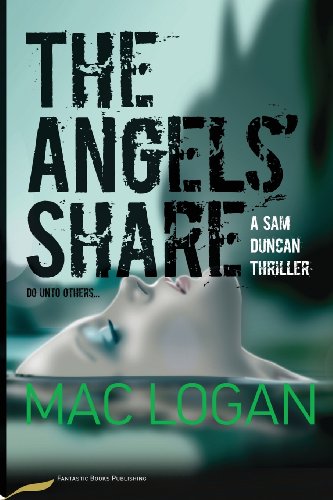 about this book: THE TRUTH WON'T SET HER FREE...

Eilidh Duncan, sister of ex-special forces soldier Sam Duncan, is on the dangerous twisting trail of some very British criminality and corruption. At the dark heart of

the UK Establishment she uncovers a seething conspiracy built on greed and the abuse of power...then the nightmare begins. She might have the scoop of the century, but will she live long enough to tell the tale?

War-weary Sam Duncan, ex-soldier and intelligence operative arrives in London to find his sister. He digs and probes. All hell breaks loose as he plummets into a malicious web of confusion, betrayal and stunning violence. Before long he is on a terrifying quest with death towing alongside. Everyone he loves is in harm's way, pursued by a murderous cabal and there's no going back. Can his old skills give him an edge, or has he been out too long?

The Angels' Share is the debut thriller from Mac Logan. The sequel, DARK ART is available now from Amazon and Fantastic Books Publishing.

A new voice, and a great book

When I read this the first time, I couldn't put it down. Credible characters, recognisable locations, and thrills and spills are peppered throughout the narrative, all set against a realistic backdrop of corruption whose reach seems to know no bounds. For anyone who enjoys crime fiction, this is well worth a read. And the sequel's good as well!