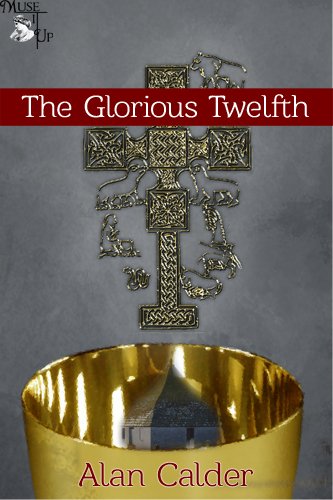 about this book: A number of elements came together to stimulate the writing of The Glorious Twelfth. I am a native of Caithness in the far north of Scotland, famous for its rugged coastline, bleakly beautiful scenery and layers of antiquity stretching back to the Neolithic. The aristocratic Sinclair family have provided the Earls of Caithness for over 700 years as well as being established near Edinburgh on the Rosslyn estate.

In The Da Vnci Code, Dan Brown suggests that the Holy Grail is buried in the crypt of Rosslyn Chapel built by the Sinclairs in the fifteenth century. The premise of The Glorious Twelfth is that Dan Brown had the right family but the wrong hiding place. Would the Sinclairs not have taken such an iconic object to the then remote and inaccessible north with strongly defended hiding places in the new castles they were building there.

The Sinclairs also built several mausoleums for their high status deceased. One of these is an enchanting square building with an ogive shaped tile roof. It is built over the remains of an ancient chapel dedicated to Martin of Tours and surrounded by a small graveyard which once contained an important Celtic stone, now in a museum. A photo of the mausoleum appears inside the chalice on the book cover as well as a diagram of the detail from the Ulbster stone. The mausoleum is sited near a large ruined farmhouse and not too far from the most famous of the Sunclair castles now alsoa ruin.

Against that backdrop, The Glorious Twelfth opens with an archaeological dig on the Caithness estate of Sir Ranald Sinclair. Archaeologist Ben Harris quickly finds clues to a medieval shipwreck associated with the Sinclairs. The Glorious Twelfth title follows because Sir Ranald's mausoleum was raided by villainous Russians after the first grouse shoot of the season on August 12th.

The action pans out from caithness to France, Italy,Egypt and Poland returning to Caithness for the finale where Ben makes his greatest discovery near the ruins of a Sinclair castle. Is it the Holy Grail and how could the Sinclairs hold on to such an iconic object?