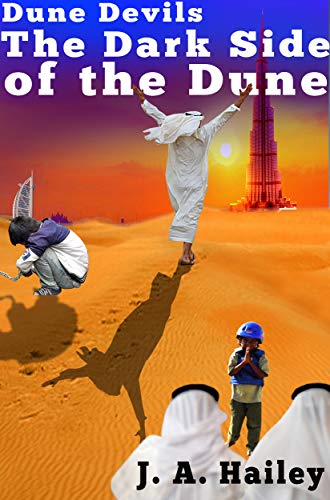 Book: Dune Devils - The Dark Side of the Dune by J. A. Hailey

If anyone ever says that I am worthy of being mentioned in the same breath as my great intrepid heroes, Ansar Burney, the Pakistani campaigner, and Higgs, the reckless British photojournalist, who both risked their lives by death through torture when penetrating the child slave jockey camps of the UAE, I would be honored, indeed.

I wrote this book when trapped in Dubai, and the surety of death by torture is my claim to demand placement on the same page as Burney and Higgs.

And yet, this book was meant to be merely a deep examination of a credit card scam, and nothing more.

This book is very slightly autobiographical, which comes from the main character, Al, being trapped in Dubai by a bank, in circumstances similar to those that led to my problems.

As the story unfolded, I realized that it would need a very special city and country for such unbelievable things to happen.

Everyone who lives in the Middle East knows how twisted that world is, but it would not be knowledge available to readers who live outside.

And so I had to write-in the city and the cruel, perverted world of oil-Arabia. That was step 1!

Later, when the book was complete, things became even more unbelievable.

And so I had to trawl through the Internet and acquire corroboration, which I inserted as end notes. That was step 2!

Read it. Be horrified.

Like it or lump it, the story is fiction, but the city is true!

It is pointless being outraged and blaming the author.

THIS IS DUBAI FLIPPED OVER. It is the world you live in!

Other books by J. A. Hailey