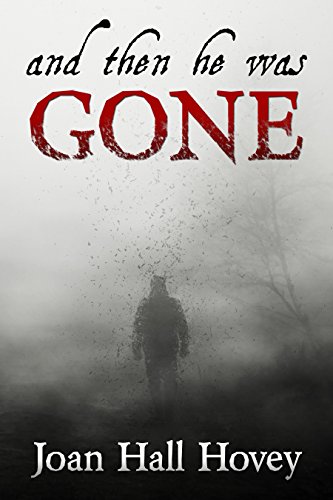 Book: And Then He Was Gone by Joan Hall Hovey

about this book: Julie Raynes' husband has been missing for six months. Devastated and confused, she refuses to believe that he would leave her voluntarily, though her best friend thinks differently. However, her Aunt Alice, a psychic, tells her Adam has been murdered, and when she reveals how she knows this, any hope that Adam is still alive, dissipates.

The police are also beginning to believe that Adam Raynes was murdered. And Julie is their prime suspect. Her life in ruins, Julie vows to hunt down whoever is responsible for Adam's murder and make them pay for their crime.

In the meantime, David Gray, a young man who was pulled from a lake by a fisherman when he was 9 years old, wakens from a coma after nearly two decades. Unknown to Julie, Adam and David share a dark connection, a darkness that threatens to devour both of them, in a terrifying race with death.

I like to write about ordinary women who are at a difficult time in their lives, and are suddenly faced with an external evil force. Women who are stronger than they think they are. I didn't think a whole lot about theme until I had written a couple of books, but I realized with the writing of my third novel 'Chill Waters' that my books generally have to do with betrayal and abandonment in some form, and learning to trust again. And more important, learning to trust oneself. Almost any good book will tell you something about the author herself. (Or himself.) You can't avoid it. But first and foremost I want to give readers a roller-coaster ride, one that keeps them on the edge of that proverbial seats and resonates in the imagination long after the last page is read.