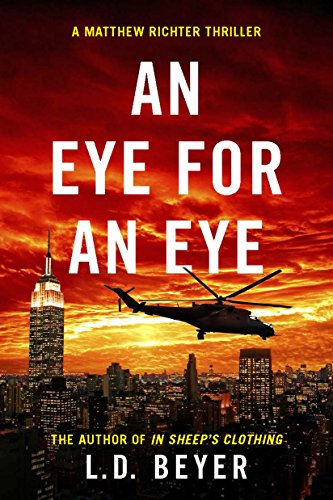 about this book: I am a self-published author and my first book, In Sheep’s Clothing, was released in September, 2015. Within six months, this book reached the #1 spot on three separate Amazon Best Seller lists and #13 overall out of all books (“paid” rankings not “free”). This book has over 100 five-star reviews on Amazon, with a 4.6-star overall rating, and 100 five-star reviews on Goodreads. The cover design won a Gold Star from The Book Designer. The sequel, An Eye For An Eye, was released in January and was selected as the Pitch Perfect Pick Contest winner by Underground Book Reviews. This book has 25 five-star reviews on Amazon, with a 4.8-star overall rating.

I write what I like to read. I love thriller and suspense novels—medical thrillers, legal thrillers, historical thrillers, political thrillers—particularly ones that are full of intrigue, and ones that are fast-paced, with lots of action & adventure. My taste in movies is the same. Intrigue, suspense and action & adventure—I’ll take that any day! When I read or watch movies, I want to escape and to live vicariously through the characters, even if only for a short while. I want to root for the good guy and hate the bad guy. For me, trying to bring this type of experience to readers is a huge thrill. I can only hope readers are able to experience this with my books!

I've been asked many times if I had a favorite character in my series. That would have to be Matthew Richter and he is the reason that my first book, In Sheep's Clothing, has become a series. He’s the protagonist of my first two books. He’s the unassuming hero. Saddled with some personal baggage, he nonetheless rises to the occasion during times of crisis. With a keen sense of right vs. wrong, he selflessly puts himself at risk to save others. I have a third book in the Richter series coming out later this year.