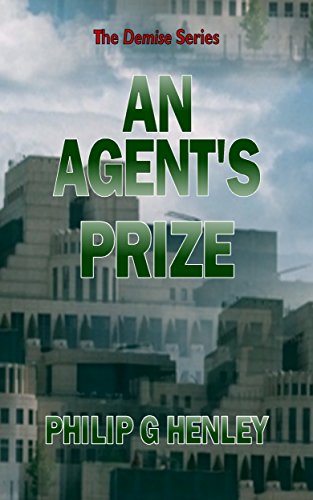 about this book: An Agent's Prize is the concluding part to the Demise trilogy which started with An Agent's Demise and was followed by An Agent's Rise. The book continues the story of the spy assassin John Slater living with his new wife under an alias. All should be fine but Al Qaeda is plotting new atrocities in the USA and the UK. Investigations on both sides of the Atlantic uncover elements of the planned attacks but not before Al Qaeda strikes against the intelligence services themselves. Meanwhile Slater's existence could uncover the original Demise conspiracy.

The book is a natural conclusion to the events that created the real Iraqi dossiers used to justify the 2003 Iraq war. It has take six to 9 months to write this element and the title is linked via rhyme to the earlier parts and to the conclusion. The cover matches the style of the original two books featuring a distorted view of the HQ of the UK's Secret Intelligence Service MI6.

As with all book writing, the hardest part is making a coherent plot and moving between the different elements in a complex tale. Research for this final part, has been mainly on locations and concurrent real events in the book's timeline. The danger with all these real elements is our memories are not reliable so I need to make sure a building or road exists before I have a character interact with that element. The little details are key to making the scene as real as possible. I hope the readers enjoy the conclusion and especially the action sequences.