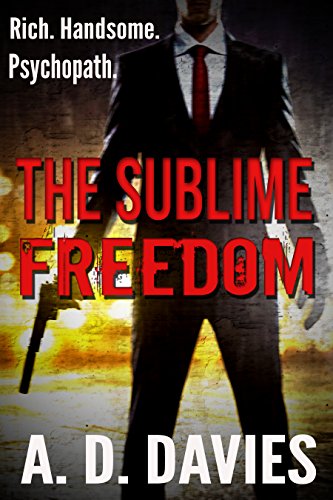 Book: The Sublime Freedom by A. D. Davies

about this book: When veteran LA detective Frank Russo discovers his daughter may have found a serial killer online, one accumulating followers as "fans", he knows he must act quickly. Breaking in a new partner, and determined to pursue a politically-connected suspect, his desire to see justice done collides with the need to protect his family. And as he realizes his own past may be connected to these murders, he will risk everything to take down a killer who thinks he is above the law.

The Sublime Freedom started life as a screenplay, which garnered some interest a few years ago, but ultimately would have required a "star" to take on the role to make it feasible. One producer actually suggested it would make a better book than a movie, so here it is!

The pacing of the novel should make it a fast read, and because it is structured very much like a movie, it will keep the pages turning.

From screenplay to book wasn't exactly straight forward, though. For starters, there was a gap of a few years, and the police climate had changed, not least the move from LA's premier detective building Parker Centre to the Police Administration Building (PAB), and of course a lot of restructuring of other law enforcement agencies. Social media, too, had taken off in a much bigger way, so that needed incorporating into proceedings.

But, ultimately, I had a blast starting this story up again. All the elements I enjoyed before are there: the snooping father trying to balance his investigation and the relationship with his daughter, the dynamic between a veteran and his younger partner, a serial killer who suddenly realises his time is nearly up, and a mid-point twist that was highly praised by the movie people who read the original script.

A fast paced serial killer thriller that sees a killer who thinks money elevates him above the law confront a cop who will let nothing come between himself and his family.