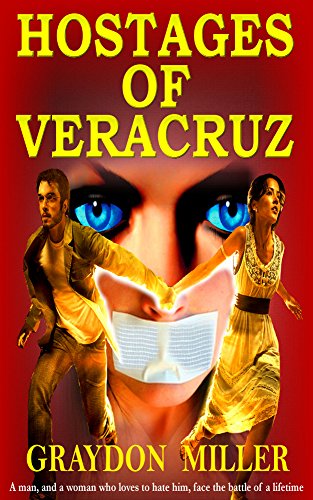 Book: The Hostages of Veracruz by Graydon Miller

about this book: An item in the hard-hitting Mexican news magazine, "Proceso," caught my eye one morning in 1994—an inconclusive investigation into persistent rumors of organ-snatchers in Latin America. Immediately intrigued, I saw an opportunity to insert fiction into reality and to tell the truths that more factually-based writing can only hint at. And so was born, "The Hostages of Veracruz."

All my plans for a tidy short story went awry. A beach bum photographer, Peter Vandervoort, came into my life with the strength of an iguana's jaws, and wouldn't let go till the short story had grown into a novel. I got some help in that department from my first wife. One Saturday morning before I went to teach a language class at the University of Guadalajara, I left the manuscript for her to read, fully confident that after class I would come home and be showered by praise. Instead, she said, "It's not enough. You need to continue the story."

I was shocked; this was story I thought I was done with, but I was just beginning. I wouldn't finish it until the final months before the start of a new century. There was a ton of research involving what organs could be transplanted and how long they could be stored. I cleverly carried out this research often while covering other stories as a reporter in Mexico. The key detail from this mountain of research was the discovery that of all the body's organs, the eye is the one that matures soonest, around the age of eight. I soon found that, interestingly, medical qualifications were no gauge to the beliefs of those I interviewed. Somebody with an MD was just as likely to be convinced there really was trafficking as those less educated were likely to be skeptical. I never did come face to face with an actual victim of organ trafficking, but the anecdotes were chilling, like the one about the boy who came back to his village blind and his pockets stuffed with money.

Veracruz was chosen for purely geographic reasons and the demands of the plot: it had a port and they celebrated a carnival there. One facet of the book—the harassment of a photographer—has proved eerily prophetic. The state of Veracruz is now dangerous ground for reporters. Since 2010 more than a dozen have been killed, and in 2015 a photographer, very similar to Peter in my story, was threatened and hunted down for taking the wrong picture in the wrong place.

The novel's expose of greed in benevolent causes is still, sadly, timeless enough. Of course it is not sad, but simply the by-product of a money-breeding exuberance that constantly brings people to choices between right and wrong, profit and scruples. Above all, "The Hostages of Veracruz" is meant to be riveting entertainment. Readers have told me they hate to put it down and can't wait to get back to it. If that's so, I have done my job well. . . with a little help from my first wife.