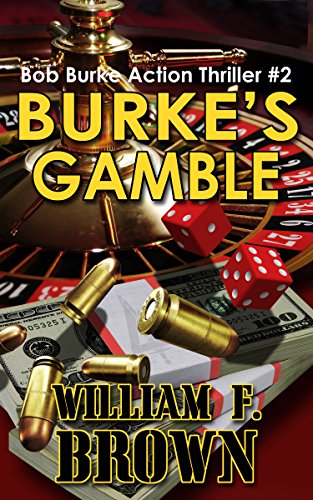 about this book: This is Book 2 in the bob Burke Action Thriller Novel Series. In Burke's War, Bob Burke witnessed a murder and isn't the kind of guy who leaves something like that alone, and ends up butting heads with the Chicago Mafia. In Burke's Gamble, it is one of his friends, who is killed. He may look like 'the telephone repair guy,' but before eh took his uniform off, Bob Burke was a West Point graduate, an Army Ranger with five combat tours in Iraq and Afghanistan where he received most of the serious medals the Army gives out, and a member of the elite Delta Force. So, when you kill a member of that brotherhood, payback will be hell. He and his former sergeants are some of the most lethal killers the US government ever produced, and they don't take kindly to one of their own being murdered. This time, it will not be a simple 'Gumbah' hunt with sniper rifles in a Chicago Forest preserve. The target is a Mafia Don holed up in the penthouse of a large hotel casino complex in Atlantic City, backed up by a dozen of his own gunmen plus, an elite team of foreign Special Operations mercenaries brought in to take down Bob Burke and his men. While there's always a place for a Barrett .50-caliber sniper rifle, this time, in addition to his own Delta Force sergeants, Bob calls on two baby-faced computer Geeks, a three-star Army General, a Chicago police detective, a female Air Force Captain, Bob's new wife, a Russian computer programmer, and one of the world's best pickpockets on an overnight.' pass from Cook County Jail. From stealth helicopters to luxury yachts, and bodies in 55-gallon oil drums, the action is non-stop. This time, Bob and his 's Merry Band of Rascals aren't going to shoot it out with them, they're going to take the Mob's money, all of it!