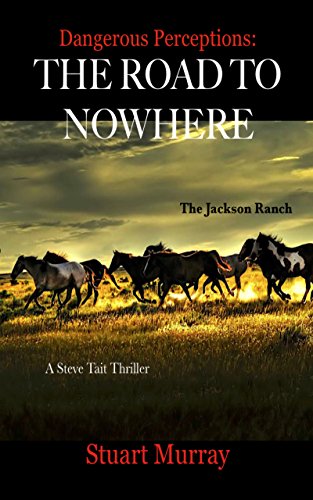 Book: Dangerous Perceptions - The Road To Nowhere by Stuart Murray

about this book: Dangerous Perceptions: The Road To Nowhere is a story of hope and the eternal struggle to create a better life. It's the story of Steve Tait, a former Marine who has integrity, drive and determination, and little else. He has given up a military career for an intelligent, attractive woman who had no shortage of eligible admirers from which to choose. She chose him based on who he was, and for his ambitions to make something of himself. It didn't happen, and he ended up a disenchanted security guard going nowhere. And if he's not going anywhere, then neither is she.

During a trip through Montana an incident brings them into contact with Jackson, a man who is the antithesis to Tait in every imaginable way. Jackson is a rich and successful rancher, a self made man who rules his corner of the world and the local town with an iron will. But he has his own problems, one of which is deciding which of his three sons has the capability of taking over the cattle and business empire he created. Tait's unexpected arrival, combined with a life endangering incident provides the opportunity to test his sons and teach Tait a hard lesson. It also provides an opportunity to rid himself of the one remaining settler occupying a key piece of land needed for a planned development.

This sets the stage and Dangerous Perceptions: The Road To Nowhere is an exploration of these people and their current predicament. The back story provides an insight into the unique lives that brought them to a place and time where a chance meeting takes them all down a dangerously unpredictable path.

Dangerous Perceptions: Unintended Consequences is the explosive sequel that reveals the fallout from the developments in The Road To Nowhere. Tait finally sees a way to create a new future and takes decisive action, but the consequences of those actions, as well as Jackson's reaction are far reaching, and extreme. The future is thrown into doubt, lives are threatened and ultimately it becomes evident that the only way to resolve the situation is by unconventional means. And as the fallout spreads and tensions escalate Tait's wife becomes entangled, falls victim and quickly realizes no one can save her but herself.

• What are the benefits your book offer readers?
Entertainment, and the realization that everybody struggles in life. It is also an example of obscure opportunities enabling those with vision, motivation and determination to create a better future. These books are written to provide inspiration that there is hope even where it appears hopeless, that situations, no matter how difficult can be resolved, and that events and reactions need to be examined from more than one perspective.

The story is a passionate exploration of the struggle to rise above what is by providing a fictional account of the extraordinary effort it takes to become successful. It is also an insight into another world — a remote corner of Montana, a place few people will ever encounter, either in person or through the pages of literature. It is also an illustration of how every action has a result, and that unless provided careful consideration those actions often produce unintended consequences.

• What inspired you to write this book?
Inspiration for these books was provided by an actual event. The first part of the book is a fictional recreation of an incident that occurred several years ago. Only the names of the characters were changed. What developed after that was entirely based on my own imagination. The end result is a story with depth, and a set of characters who come to life within the pages.

The inspiration for the complete work was the desire to create something original and entertaining, presented in a unique setting with interestingly complex situations, and deliciously flawed characters.

Astute observers will appreciate the hidden depths, the underlying themes and intuitively understand the source of inspiration.

• Who are the primary readers of your book?
These books are for men and women of all ages who want to intimately know, understand and appreciate the characters; who want to read and become immersed in a story that envelopes them in a passionate embrace; a story where the outcome is far from certain, and where everything can, and frequently goes wrong. This is a story of life where the hopes and dreams of some are realized, and where others are broken, crushed and destroyed.

The readers are people interested in knowing how a former Marine ended up with PTSD, how he captured the heart of a beautiful woman, fell on hard times and becomes resolved to do something about it even as time is running out. They will also be readers with the desire to glimpse life on a big ranch and in a small town in Montana.

The primary category the book is listed under is Thrillers and Suspense. But there is so much more that readers with a broad spectrum of interests will find appealing.

• How long did it take to write it?
The two books were developed over a period that exceeded ten years. There were many, many rewrites, and too many editing reviews to count. No doubt some grammatical and editorial mistakes remain despite a concentrated effort to ensure elimination. Hopefully these are sufficiently rare to detract from the reading experience.

• How did you come up with the title?
Dangerous Perceptions is a reflection of the basic premise of the book that life is about choices, and the way events and actions are perceived, often incorrectly based on predispositions, bias, tendencies, power, money, influence and a host of other factors.

• Why did you choose this cover?
The Covers depicts the geographic area where the events in the book take place. The photographs are of the high western prairies at the point where they contact the foothills of the Rocky Mountains.

• What was the hardest part of writing your book?
Without doubt the endless process of editing is the most trying part of writing. It's all about balance and the provision of enough detail and explanation without laboring a point. And it's all about setting and maintaining a pace to maintain engagement. It's equally important to ensure a sense or rapport and empathy for characters who have to be relatable on every level. And finally, the story and situations have to be entirely believable.

• Did you learn anything from writing these books?
Patience is the first word that comes to mind. Determination, Perseverance and Commitment follow right behind. Humility and Appreciation are also experiences that are realized. Then there's the hard lesson that it is impossible to create something that will be universally liked, accepted or understood. A writer quickly learns that publishing a book exposes any and all weaknesses. It also invites critics, of whom there are plenty to wade in with unrestrained enthusiasm.

Praise and appreciation, on the other hand, is a concept given sparingly and occasionally begrudgingly. And so, when it arrives, and is delivered with sincerity, it is received with the utmost gratitude.

The last lesson learned is that, except for the lucky few, the path of a serious author is a hard road that bears little fruit or recognition, and that writing a book is the easy part. Promotion, visibility and recognition are by far the most difficult obstacles to overcome.

• And finally… What do you want to say to your readers?
A massive thank you would be the first thing I'd want to express. Especially to those who get it, were entertained, appreciated the work and took the time to write a nice review. These people are the positive reinforcers, the motivators who power the engine that keeps the process going. It's through them that we try harder and work up the passion to take another long and often lonely trip through the meat grinder. I have been fortunate to have a few supporters who fall squarely into that category and to each and every one of them I offer my deepest appreciation.

I also give equal thanks and appreciation to those who provided constructive, well intentioned criticism, for without that there is no ability to recognize the things that need to be changed in order to improve, develop and grow.

The last thing I would like to mention to those who are interested, is that my newest book 'Perfectly Played' is due for release in February. A description of this book is provided on my blog and can be viewed at my Goodreads page, or on my website: stuartmurraybooks.com