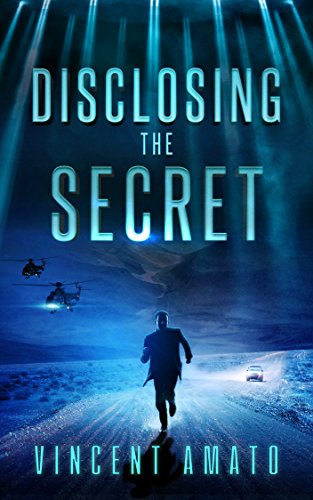 about this book: Jake Marcel never wanted anything to do with the military, let alone the intelligence community.

He was the grandson of Major Jesse Marcel, formerly of the 509th Bomb Group for the US Air Force; his grandfather was set up as the man who mistook a downed weather balloon for a crashed extraterrestrial craft allegedly reported by the US military in the 1940s.

Jake's father had also joined the military and retired as a decorated and respected colonel, but Jake still grew up with the ridicule of his grandfather's much publicized mistake and chose not to believe in the stories of what his grandfather once found in the desert.

But when Jake uses details of his father's bedtime stories to solve an engineering problem of his own, he draws the attention of the National Security Agency. To protect their seven-decade old web of secrets surrounding the crash from being unraveled, the NSA deploys their most secret Black Ops detachments to neutralize Jake. Reluctantly, Jake accepts the help of a government scientist who warns him of the imminent threat and seeks Jake's assistance in bringing forth disclosure of the government's cover-up.

The revelations shared by the scientist have the power to transform our civilization's perception of the universe and the world we live in. As Jake struggles to examine his own beliefs, he uncovers an object that has profound implications on the question of whether or not humans are alone in the universe. The truth, he will learn, is more explosive than he could ever have been prepared for.

When Jake realizes he may be able to play a role in exposing over 70 years of secrecy by proving his grandfather's discovery was real, he finds himself up against one of the world's most powerful governments as he confronts the most closely guarded secrets of our times.

A reality the world is not ready for; a technology that's not supposed to exist; a crash that never happened; a government that was not prepared; and a truth we were never to know… Disclosing the Secret is a Dan Brown paced sci-fi action thriller. It explores the idea of introducing an extraterrestrial presence into contemporary civilization and delves into its implications on our social, political and religious beliefs, challenging the reader to ask, "What if?"

All the events and technologies embedded within the narrative are based on alleged artifacts and incidents from the recollections of Col. Jesse Marcel Jr..

What the Readers are saying:

• "Not even the X-Files can top this story's plot." — Mark Bacelic