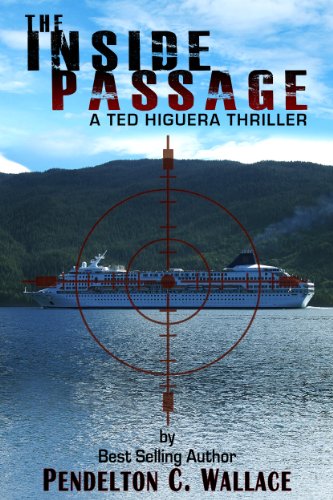 about this book: I am often asked where I get the ideas for my books. The Inside Passage is like all of the others. I read the newspapers.

In June of 2006 a group of Canadian al-Qaeda terrorists plotted to blow up Parliament, capture the Prime Minister and behead him on national TV. Only the good police work of the RCMP prevented the attack.

That same summer, I was introduced to the awe inspiring beauty of Canada's Inside Passage. Sailing my boat north from Seattle, I was amazed day after day by the diversity of wild life, the sheer beauty and the isolation of that part of the world.

I combined the two to create The Inside Passage. I moved the terrorists west and inserted my own cast of characters to fictionalize a true event. The formula worked and now there are four Ted Higuera novels and two companion Catrina Flaherty Mysteries, all based on current events.

Today's current events tell us that this horrible scenario is imminently possible.

Somewhere on Canada's Inside Passage, terrorists plot to destroy a cruise ship filled with celebrities and VIP's.

Ted Higuera, the son of Mexican immigrants, grew up in East LA. An unlikely football scholarship was his ticket out of the barrio. Chris Hardwick was born with a silver spoon in his mouth. The two become college roommates and best friends.

As a graduation present, Chris' father offers the boys the use of his sailboat for a summer cruise up the Inside Passage. Chris brings his girlfriend, Meagan O'Donnell along for the trip. Ted can't stand Meagan; he thinks she's just interested in Chris for his money.

The three have a series of adventures until they stumble upon an al-Qaeda plot to blow up a cruise ship, then the clock starts ticking.

The terrorist must eliminate the witnesses before they can report the plot to the authorities. Ted, Chris and Meagan must prevent the attack on the cruise ship with Chris' father and his new bride aboard. But what can three unarmed kids to do prevent the terrorist assault?

Other books by Pendelton C. Wallace

Video 1: The Inside Passage Trailer
Video 2: Interview with Pendelton Wallace