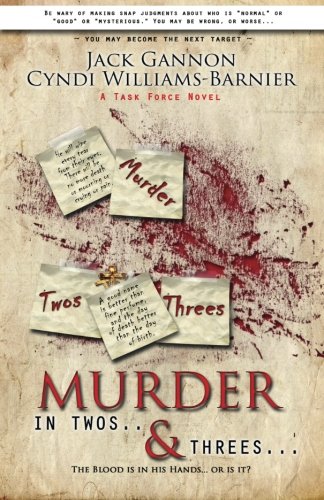 about this book: Murder in Twos and Threes is a great Psychological/Suspense/Thriller Novel. 5 Star rating on Amazon. The most common reviews from the readers? "I just couldn't put it down!"

Here's a descriptive from our first novel, MURDER IN TWOS AND THREES: Following the 9/11 terrorist attacks, a collection of domestic crimes provoked the Joint Chiefs of Staff to implement an elite task force to eliminate any future threats. And just in time. When a once-innocent child turned adult psychopath takes his righteous revenge for nearly two decades of abuse on the citizens of Richmond, Virginia, the Task Force is sent to neutralize the threat by any means necessary. Mark Jason of Jason Enterprises is recruited for his specialized military training in an effort to challenge the emotional complexity of the killer that haunts Richmond's streets. His four-man team comes equipped with uncanny, bizarre, and ingenious specialties of their own. As the hunters become the hunted, even the most lethal men in the nation are in danger of becoming victims. This suspenseful thriller will leave the reader griping the pages, as the war of intellect over delusion wages on in a deadly time trap.