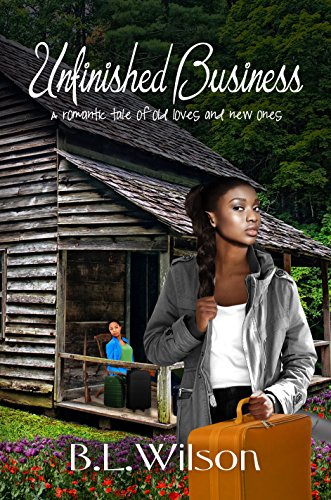 Book: Unfinished Business - a romantic tale about old loves and new ones by B.L. Wilson

about this book: I wrote this book in 2006 to challenge myself. I wanted to see if I could tell a decent suspense tale with a romantic bent. I needed inspiration to keep writing so I named one of the main characters after one of my favorite play aunts from childhood. As happens sometimes in life my play aunt grew older and developed dementia. In her later years, her children admitted her to an assisted living center for seniors.

The last time I visited my mother, we went to see my play aunt. She looked older but she was still so beautiful it nearly took my breath away. Unfortunately her mind wasn't a match for her body and she didn't remember who I was. At the time we visited, my play aunt was concerned that her husband wasn't in the room with her and she was running all over the place searching for him. My mother didn't have the heart to tell her what the nursing staff had told my play aunt a million times that her husband lived elsewhere in another assisted living center.

Her husband of nearly sixty years needed a wheelchair to help him get around. While his body had weakened over the years, his mind was still strong and sharp. He told my mother how much he regretted having to place my play aunt in a different living center but he couldn't take care of her once his body began to give out on him.

I wish I could say, my play aunt got better and she and her husband were reunited in an assisted center but they weren't. He passed away first. My play aunt's condition worsened before she too passed on. As a writer and a believer in true love stories, I'd like to think they were reunited somewhere in the great beyond.