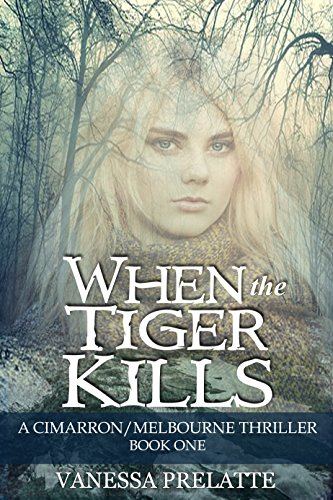 Book: When the Tiger Kills - A Cimarron/Melbourne Thriller - Book One by Vanessa Prelatte

about this book: Picture a steep cliff next to an isolated campsite located in a remote area of a vast municipal park near the city of Mountpelier, Colorado. A young man lies at the base of the cliff, still and silent. This is the crime scene that Detective Dawn Cimarron and her partner, Sergeant Rafe Melbourne, are called upon to investigate. At the top of the cliff, they find only a few clues: some empty beer bottles, the faint impression of an artist's easel in the dirt, a woman's hair clip, and a tube of green paint.

I'm Vanessa Prelatte. This picture flashed into my head as I was driving to the market about a year ago. I knew immediately that the hair clip belonged to a girl with long, pale blonde hair, and that she had been abducted by a serial killer.

I forgot about doing the marketing. Instead, I pulled over to the side of the road, grabbed my writer's notebook, and began sketching out the story that eventually became the novel "When the Tiger Kills".

As I worked out the details of the novel over the next few months, another image flashed into my head: the body of a young man wearing a silver jacket, lying dead under a tree. I realized then that, like most police detectives, Dawn and Rafe had more than one open case to deal with. Furthermore, a little over half-way through the novel, I realized that there was a completely unexpected twist to the story, as the detectives began to realize that one of the cases was connected to an old, old, mystery - one that the police thought would never be solved.

"When the Tiger Kills" is available for free to Amazon Prime customers and Kindle Unlimited subscribers. For all others, the ebook is a bargain at only $2.99. Go to Amazon and use the "Look Inside!" option to read the beginning chapters. I predict that you won't be able to resist obtaining a copy of the book and reading the rest of the story.