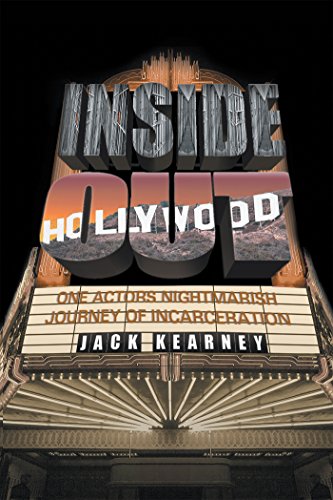 Book Review: Inside Out by Jack Kearney

about this book: For most of my life I was a struggling actor. I appeared on such shows as Mash, WKRP in Cincinnati, and General Hospital. Like the multitudes of actors who migrate to Hollywood I attended an actors workshop to hone my skills. My book was originally a script that came out of an an experimental drama workshop in the late '70s, where I had an opportunity to teach an acting workshop to the inmates of a Federal prison.

Inside Out weaves together an engrossing story of a young actor who, after volunteering for a unique project to teach drama to inmates of the local medium-security prison, months later finds himself locked in a cell as a convict. Where he now has already made friends and unforgiving enemies. It introduces the reader to multitude of characters. Some are good, some are bad, and a few are just evil. It is a fictional account of what happens to an "Everyman" that gets caught up in a system deliberately designed to treat all felons the same. Inside Out is a commentary on the difference between justice as seen in the eyes of the law, and true justice.

Utilizing a groundbreaking format, Follow Danny Belson as he goes from a care free beach volleyball loving, pool shooting, actor, who's only worry is knowing when his next audition will come, to a convicted murderer. Written using flashbacks, with no chapters, learn what a struggling actor goes through, and how, after his incarceration, Danny's life is turned INSIDE OUT. There has never been a story line where the protagonist, a non criminal is thrown into prison where he already knows some of the inmates. On Amazon I've gotten a few 5 star reviews since it launched about a month ago.

As far as writers go, at 63, I don't really consider myself a real writer in the way that most people think of one. I guess, you could say I get inspired now and then. In the case of Inside Out, once I came up with the initial premise,it just seemed to write itself. So I'll leave it up to the readers as to determine whether or not I'm a writer. I have written several TV and movie treatments, a few short stories, but before now a couple of poems were the only things published. The script that my book is based on came close to being purchased but producers of the day just couldn't handle the brutality and realism of prison life, that incredibly has not changed in three decades.

I also designed the cover which I am very proud of. Sometimes you can tell a book by it's cover. I have fought dyslexia all my life so I'm thankful for computers and spell check.

So for anyone over the age of 16 looking for an interesting, exciting, fast paced, and realistic depiction of prison my book is for you.

Inside Out is an appropriate title for this one

Masterfully crafted using flashbacks, we follow the life of a struggling actor in the late '70s. Months after teaching inmates acting as part of an experimental program, Danny Belson ends up back inside as an inmate, where he now has friends and enemies. You really learn to fall in love with this guy and all the things he has to go through to make it in Hollywood. But after his incarceration, his enemies set him up for a brutal attack, and his friends avenge him. Mr. Kearney gives us a very realistic depiction of what goes on in institutions even to this day. Danny and his avengers will make you cheer for them, and even question your own morals for doing so. At no time did I ever question the validity of any of their actions.

This is easy to understand when you realize that the author was himself an actor and this is a semi-autobiographical labor of love. Even the reason he is convicted of his crime is totally believable. Keep in mind that it is a federal prison where the drama workshop was conducted, that he now incarcerated in, is quite remarkable. "Inside Out" is above all a stark glimpse of the horrors of prison life and inadequacies of the justice system. For those readers that are looking for a good old fashion story of vengeance, this is the one to read. When Danny is teaching in the workshop it is obvious that some of the inmates admire him, while others form a hatred that they will never forget. After his incarceration, his enemies set him up for a brutal attack, and his friends avenge him.

Finally I have to commend the author on his writing style. It is a gripping and fast paced ride that takes you a while to realize that it is written without chapters. That may also be a first. I can't recommend this book enough. If you are sixteen or older, do yourself a favor set aside two hours, And read "Inside Out". [by Avery Mann]