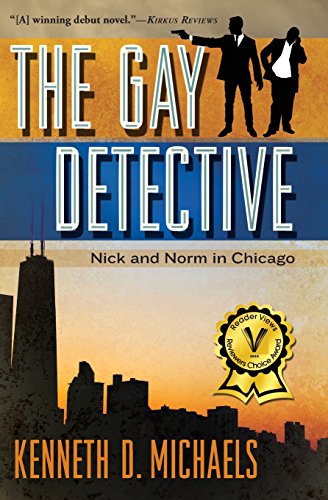 Book: The Gay Detective - Nick and Norm in Chicago by Kenneth D. Michaels

about this book: The Gay Detective is a murder mystery in which the lead detective also ends up being the ultimate target of the killer. One after another, people who are close to him turn up dead, but when his turn comes up, his quick thinking partner saves the day. I created two characters, one gay, the other straight, who initially were opposites but they bond as if they were brothers, which in police circles they are.

I wanted my readers to enjoy a taut thriller but be left with insights into how gay and straight individuals interact with each other. I hoped to show we are all more alike than we are different.

My intent was not to concentrate on gay sex, like many other m/m books, but rather on issues concerning the gay population such as: homophobia, coming out, and discrimination. Each minority has different problems but similar struggles.

The most important thing I learned from my book was that I had been taught to be homophobic myself, and as a gay man I needed to be aware of this and resolve it. It was quite common with my generation because homosexuality was rarely discussed, unless it was negatively.

I'd like readers to realize that each of us, gay or straight, needs to be brave, kind, and courageous to stand up for the values we believe in.