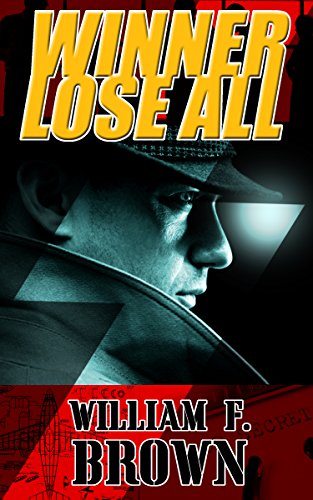 Book: Winner Lose All - A Spy vs Spy Thriller by William F. Brown

about this book: Winning a war is the easy part. It is winning the peace and insuring you can win the next one that is infinitely harder. As WW II grinds to its inevitable, bloody end in the rubble of Nazi Germany, smart, cynical men in America, England, and Russia turn their hard eyes to the next ‘cold’ one. They know that the future belongs to whomever can grab the secrets of the ‘wonder weapons’ -- the rockets, jet fighters, and long-range bombers that Hitler unleashed upon them and almost brought them to their knees. Those weapons and the science behind them will shape the balance of world power for decades to come. Winner Lose All is the story of that espionage battle. It is also the story of the torrid but impossible romance between Ed Scanlon, a brilliant, young, American OSS agent and Hanni Steiner, the gritty, street-smart leader of the communist resistance cell in Leipzig. They now find themselves on opposite ends of an international tug of war over the plans for Germany’s revolutionary Me-262 jet fighter and the scientists who designed and built it. To succeed, they must not only outwit each other, they must stay one-step ahead of Otto Dietrich, the sadistic Gestapo Chief of Leipzig, who has plans of his own. The stakes in this military political thriller could not be higher. Once-bitter enemies are tomorrow’s allies, old friends cannot to be trusted, and lies, double-dealing, action and adventure, spy versus spy, and treachery are the norm.