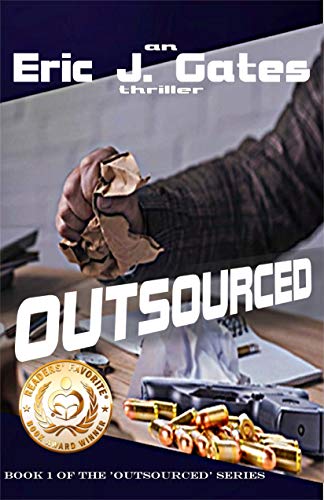 about this book: 'Outsourced' features a New York-based writer of thriller novels who receives a mysterious package from a fan. That fan turns out to be a professional killer. That's just the start of the writer's problems; problems that escalate way beyond anything he could have imagined on the pages of his novels, as death and destruction follow rapidly.

Just when matter cannot get any worse for the novelist, he learns a high-tech Intelligence agency has been tasked with obtaining the contents of the package too, and they will stop at nothing to achieve that goal. They have their own global agenda. The agent assigned to the task is out of her depth working on US soil and her methods are unsuited to a civilian environment. As pressure mounts for her to achieve results, she becomes more and more radical in her approach.

And, if that's not enough… the sender wants it back, and his methods are even more direct and violent! He believes the contents of the package were used to try to kill him and his aim is to recover them and exact his revenge on the writer.

Inside info: the cover reflects both events in the climax of the novel and a representation of neutron paths in Quantum Mechanics? - Confused? The novel will also make you question YOUR Destiny!

• Voted BOOK OF THE MONTH Feb 2015 on Goodreads