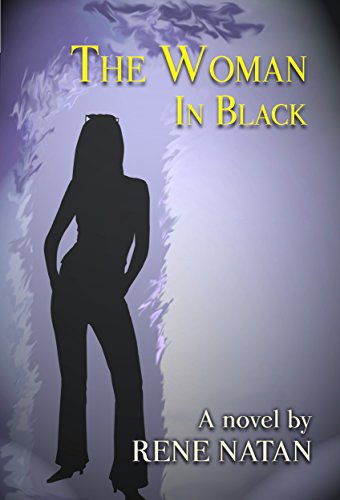 Book: The Woman in Black by Rene Natan

about this book: Varlee's Chief of Police, frustrated by five years of unsuccessful attempts to break through the series of blackmails that troubled the peaceful Ontarian town, resigns. His successor, Conrad Miguel Tormez is a dynamic man in his forties who is not afraid of trying something new or unconventional. When Clara, a call girl suspected of being part of the criminal gang, dies in a car accident and nobody shows up to claim her body, he engineers a daring operation. He replaces her with Savina Thompson, an ex-agent and amateur performer, whose physical characteristics are close to the deceased's. The substitution is favored by the fact that the police department is testing a speech emulation system, which allows replacing somebody's speech with the words of another person—almost in real time. And Clara has left plenty of voice samples on her recording machine. Savina, an orphan at the age of fifteen who took care of her younger brother, is reluctant to play Clara's role, but Conrad uses as leverage the help he has given her when she was in trouble. The numerous messages on Clara's voicemail show that the victim of the next intended blackmail is Denis Taillard, a well-established industrialist of Varlee. In addition to the risk Savina encounters by impersonating Clara, there is also the problem that she has to act as a sophisticated socialite, while she belongs to the working class.

Conrad has problems of his own. For the last year he has been searching for Isabel, his mentally-impaired daughter. His search brings him to the Rocky Mountains, where he finds Isabel living in a log cabin with a baby and a wolf.

As the operation unfolds, Conrad Tormez realizes that the mastermind of the criminal ring is a formidable opponent—he anticipates his own moves and his deadly tentacles seems to be able to reach anybody, anywhere, anytime.

An excerpt from the novel:

The door of her apartment opened onto a living room furnished with an oval table, two wooden chairs, a china cabinet, and an old sofa. The windowsill was crammed with purple and white African violets. The place was small, but neat and cozy.

Denis walked in and sat on the sofa, close to Conrad.

Soon Savina made her appearance. Her straight blond hair swayed as she paraded in front of the two men. She wore a double-lapel suit, with only one big button at the front. Without a word, she walked to face Conrad, took one step sideways and stopped in front of Denis.

She turned around and let the wrap-around skirt fall to the floor, a small, lace slip revealing more than what it was supposed to conceal.

But the show had just started. Savina unbuttoned the jacket and threw it on the floor, showing a lace bra and a slim, well-built body. She slowly turned around once more. Denis enjoyed the stunt, but Conrad did not dare look.

"I don't know if Mr. Taillard is turned on by black or natural-color stockings. I look so naked because I have no pantyhose."

"Natural color," Denis answered promptly. "The outfit looks beautiful on you and so does the lingerie." He wanted to give her credit for being a good sport.

"But I still have five pieces of undergarments…"

"No lingerie, and no stripping," Conrad hissed between his teeth.

The evening gown was straight, closed at the front, with a big V-slit at the back, Savina looked wonderful in it, but her walk was uncertain because of the high heels.

Denis gave her a hand. "You look very elegant," he said.

Conrad was still perspiring because of the first exhibition, when Savina showed up in a transparent black nightgown. The pleats unfolded from top to bottom. She was naked underneath, and that made Conrad explode.

"Why?" Savina was making a point. "I have to pose in the nude in front of a man who is a stranger to me in the spirit of duty and cooperation, and you—you can't look at a naked girl?" She stood in front of him and rollicked close to Denis. "Does my shopping meet with your approval?"

Denis rose, took her hand, and kissed it. "It surely does. Absolutely. Completely. Totally."

From the nearby table Savina picked up a piece of paper. She waved it in front of the two men. She said, "That's good, gentlemen, because here's the bill—six thousand, nine hundred and ninety-seven dollars."

• "And that's what makes The Woman in Black so compelling: in the end, it's all in the standoff." — Diane Donovan, Author

• "This book contains more characterization and background than is typical in thrillers, but the flashbacks did turn out to be relevant to the plot." — L. Frankel