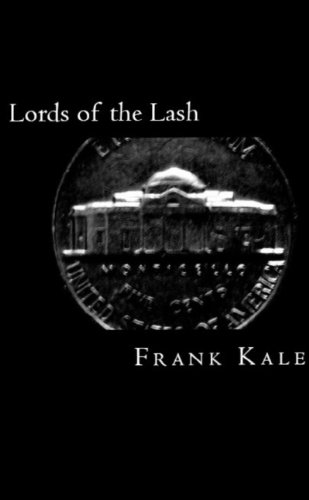 Book: Lords of the Lash by Frank Kale

about this book: Lords of the Lash is a racial thriller. Until Quentin Tarantino's new movie came out I really had nothing with which to compare it. It takes place both during modern times and during the 1850's. I wrote this book because I wanted to write a conspiracy theory type of book, and I needed a backbone for my conspiracy theory. Racial relations in this country have always intrigued me. I am white in live in one of the whitest states in America, New Hampshire. Admittedly, I have no black friends. When I was in high school I had one black friend. Also admittedly, I get nervous around black people. I do. I don't think of myself as a racist. Yet whenever I interact with a black person I feel a wall between us, which I think is the unspoken state of racial relations, and maybe my theory of mind. I wonder what the black person thinks about me as a white person. And I wonder if the black person is wondering about my thoughts and what I think about him or her as a black person. And yet the only exchange we might have is a couple of words. Perhaps, "Is this seat being used," or "Do you know where X, Y, or Z is?" But behind that exchange I sense the whole history of racial relations in this country: forced abduction on slave ships, slavery, reformation, Civil Rights -- everything. I think I get this sense because a racial relations in America is the elephant in the room that no one is talking about. It's like getting in an argument with your lover over something stupid when you know the real issue is something else. As white Americans we want to pat ourselves on the back and tell ourselves that everything is hunky dory when it comes to racial relations. But that view does not match the statistics of the situation. And as the computer age has taught us, it is statistics and not feelings that do not lie. And while we might believe (because we feel) that racial relations are hunky dory in America, one brief glance at the statistics should convince us otherwise: Did you know that America has the highest incarceration rate in the world? Yes, you read the right: the entire world! And guess what, by an overwhelming majority these jails are populated with African-Americans. "Okay Fine," you might say, adding, "But that does not conclusively point to racism." And I would agree. The dots need to be connected. But clearly something in the system is broken. It is a documented fact that many African American females have a difficult time finding an African American mate because so many of the African American males are imprisoned -- or rendered unemployable because of their status as felons. (We have all read that on the employment application: Checking off this box to indicate you are a felon does not automatically bar employment. But what it should add is: and good luck with that!)

The tricky thing about racism in America today is that it is not as clear cut as it was in years past. Not as many whites go around using the N-word and burning crosses, and committing obviously racist acts. American racism has become less individualistic and increasingly institutionalized, and I get into these issues in my racial thriller: Lords of the Lash.

The villains in my book are an elite group of racists who pull the strings from behind the scenes. They have named themselves after Thomas Jefferson, because he was the founding father who owned the most slaves. (Yes, you read that right too -- all the founding fathers owned slaves, but Jefferson owned the most). The book touches upon the founding fathers difficult and contradictory relationship with slavery: that they were attempting to build a free nation, to emancipate themselves from British authority and the rule of a king, and yet they were all slave owners. How did they deal with this contradiction? The book touches upon this too.

Spike Lee recently stated that "Slavery was not a spaghetti western," in regards to Django Unchained. I can respect that view. The strange thing is that the Emancipation Proclamation is more than 150 years old and it is a subject that we still sense is perhaps too recent to fictionalize. And yet WWII happened almost 100 years later, and the use of Nazi's as villains has become commonplace and stock. The use of slave owners as villains is not a commonly used device. And I think this speaks to the elephant in the room. Collectively, we sense that racial relations are not yet settled in this country. Yet, we want to believe otherwise. We might point to Barack Obama. In the Lords of Lash, the conspiracy that has taken Jefferson as their namesake, has actually managed to get Obama elected. He helps to further their cause. "How could this be?" you might ask. The book explains.

The book is long, over 200,000 thousand words, which is about 500 pages. But because the issue which drives it (hidden racism) is so prevalent, it could have been much longer, and a sequel is in the works.

I am a new author and this is not a typical thriller. So perhaps those two things are working against you (reader) giving Lords of the Lash a shot. But I believe that the plot is nicely paced, the twists are sound, and that it works or more than one level. For these reasons I believe that you will enjoy, and perhaps learn a thing or two, from my book: Lords of the Lash. If you have any questions feel free to contact me through Twitter or Facebook.