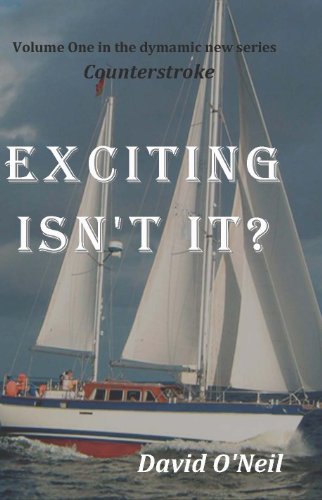 about this book: John Murry isn't exactly what comes to mind when one thinks about a dashing hero. At the age of forty-nine, John has become a widower and is about to set out on a long cruise on his own in order to get his life back in order. To his surprise, he forms an attachment with a run-away girl who has inadvertantly taken papers from one of the major crooks of France, putting her and anyone that comes close to her in great peril. Still, John is ex-military, ex-police and still have connections with members of the British government and the MI6 secret service as well as with members of the law enforcement community in Europe and England.

He will need all of those contacts as the "bad guys" are determined to kill him, his companion and recover the missing documents. As events continue to unfold, it is evident that John has tapped into major crime syndicates and he has to find help in order to survive. And find help he did. So is born Counterstroke, the series, that soon encompasses not only England and Europe, but the United States as well, as the tenacles of organized crime are world wide, and threaten John and his friends unless the crime figures are terminated.