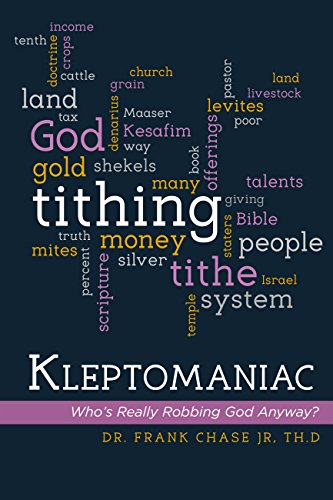 about this book: Monetary tithing has been taught as an undisputed fact in churches for centuries. Kleptomaniac: Who's Really Robbing God Anyway challenges that assumption and puts modern tithe teachings under the microscope of scripture. This book examines the word tithe from the original Hebrew language and presents the authentic meaning of the the orthodox term based on the land, language and literature of the Hebrew people.

For church-goers who are tired of being told they rob God of tithes and offerings every Saturday and Sunday, and that God requires a tenth of their income until death, this new book opens the biblical scroll and shines a light on the truth of scripture by debunking centuries-old tithe doctrines, which say a tithe is ten percent of a person's income. The author also explains why many church-goers are not the ones who really rob God. But exposes who the real God robbers are in this shocking tithe manifesto.

Kleptomaniac: Who's Really Robbing God Anyway is an educational book that tackles the religious taboo subject of monetary tithing and presents information about an under-saturated subject that the book world does not cover much. The book is a scholastic, theological work and should be read by anyone who has skepticism about the truth and accuracy of the modern monetary tithe system that is not contained on the pages of the Bible.

The inspiration for this book came from a simple question. Did God really want money from believers as a tithe or did man change the Bible to get the wealth they to build religious institutional empires? In writing a book about tithing, I learned more about God's nature than I had ever learned in my entire life. Every christian will get an education about tithing if they read this book. The hardest part about writing the book is how would people respond to me as an author who questioned the validity of monetary tithing.