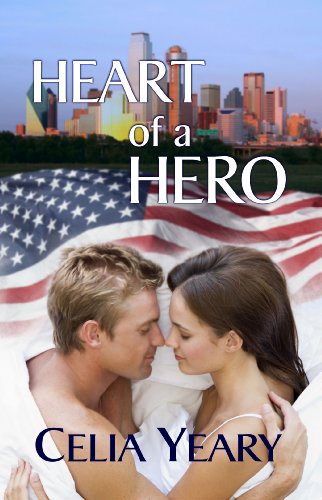 Book: Heart of a Hero by Celia Yeary

about this book: Most of the books I write are Western Historical Romance, some Western Contemporary Romance, but this novel is contemporary romance set in a small Central Texas town I called Bonner, but also in Dallas.

Matt Carrington comes home to Dallas after being honorably discharged from the Army. He'd spent his Army stint in the Middle East war, had been captured and imprisoned, and finally escaped. During the escape, he was wounded.

The war was difficult, but when he comes home to Dallas, he learns his fiance and his parents imprison him as much as the terroists did. He cannot live his own life--so many demands are made on him, he leaves town and drives south. His destination? His grandmother's big house on the river.

There in a downtown cafe, he meets a pretty waitress named Lauren Delaney, the perfect girl-next-door kind of woman. She is pretty, sweet, kind, and funny. Soon they develop a relationship.

Matt feels some guilt because after all, he is engaged to a Dallas girl.

But Lauren has her own secret which she feels is necessary to protect her heart.

During the long hot months, a hurricane almost destroys the town. Matt and Lauren work with a team to save as many residents as they can, and in the process fall deeply in love. When the danger is past, the two lovers suffer from their own lies and misunderstandings. Can they find peace and happiness without hurting others?

Other books by Celia Yeary (more)