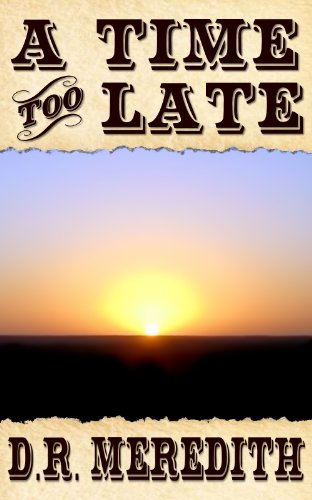 Book: A Time Too Late by D.R. Meredith

about this book: It is the duty of the writer of historical fiction to put imaginary toads in real gardens. Based upon photographs, journals, personal memoirs, and contemporary newspaper accounts, my garden--the Texas Panhandle between 1877 and 1882--is as real as I can make it. The weather, the condition of the range, the epidemic of Texas fever, the rustling, and the prairie fires are based on newspaper accounts. The Panhandle Stock Association, building the drift fence, Billy the Kid, and the Winchester quarantine are real events, and many of the characters are real, too, as are the ranches I mention. Into this real garden walk Mattie Jo Hunter and Jesse McDade.

In the frontier Texas Panhandle, an almost exclusively masculine world, women were seen as either whores or helpmates. Mattie Jo Hunter was neither. Determined to build a ranching empire on the empty Texas plains, she defied her father, her despised husband, Samuel, and society. She would do what she had to do to make her dream a reality. With help of Jesse McDade, Indian fighter, former Texas Ranger, and now manager of Mattie's Bar H Ranch, Mattie would succeed. She would stand tall and cast a long shadow over the Texas plains. As her bond with Jesse grew stronger and they became lovers, Jesse knew he was losing his honor and risking his dream of owning land of his own. When Mattie's father threatens to destroy their dreams, each must decide whether their bond to the land was stronger than their bond to each other.