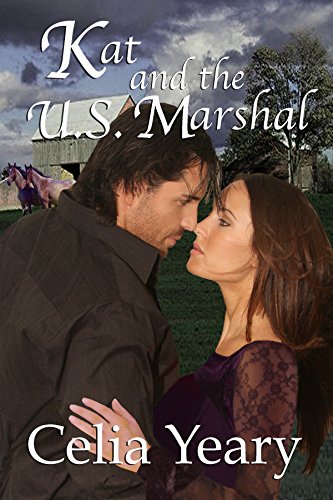 Book: Kat and the U.S. Marshal by Celia Yeary

about this book: Kat and the U.S. Marshal is the last and fourth in the Dime Novel series for Publishing by Rebecca J. Vickery, under the Western Trail Blazer imprint.

After writing three successful Dime Novels, I was encouraged to write a fourth. From the first one, Angel and the Cowboy, the cowboy/retired U.S. Marshal has a sister named Katherine Garrison. She visits his ranch in the last part of the book to celebrate Christmas.

Kat Garrison was the perfect character for this fourth novel.

Kat is home one evening, putting finishing touches on her parlor in Old San Antonio, when she hears a knock on the door. She's not dressed yet, and only wears a calico dress with an apron, but knows her gentleman caller would not arrive this early.

At the door is U.S. Marshal Diego Montoya, the man she met one weekend ago at her brother's ranch. He is in town on assignment to track and arrest a swindler and a killer.

A fun part of researching San Antonio during the latter years of the Nineteenth Century was finding that the house of ill repute I needed in the story might have actually existed. For many years, a Red Light district did exist in the city, but it consisted of legal operations because San Antonio levied taxes on the business, including the whore houses. This district remained until Gen. Dwight D. Eisnhower--in the forties--was commander of a military base in San Antonio. He ordered it shut down.

But the district is important in my story. See how Kat and Diego work together to catch the killer. And also find out if Kat can really love a man who is so different from her. I do hope you enjoy it.

Other books by Celia Yeary (more)