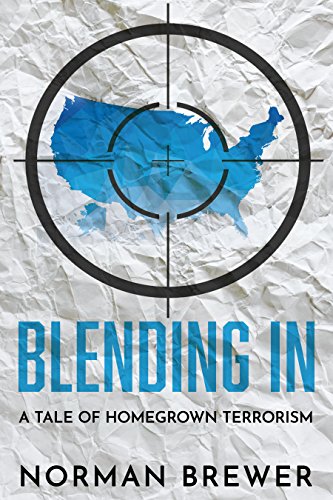 Book: Blending In - A Tale of Homegrown Terrorism by Norman Brewer

about this book: Blending In A Tale of Homegrown Terrorism smacks of being unique – told from the perspective of the terrorists. No special agent or dogged detective saving the world as time runs out. Instead, follow Stickman and Maple as they launch a murderous campaign to bring down the U.S. government, starting with an attack in the nation's capital. Soon hunted as Public Enemy No. 1, they go into hiding in rural Pennsylvania. Not to be denied by the nationwide manhunt, they use past ties with radical Islam to recruit foot soldiers and procure munitions for attacks in the Midwest that result in horrendous casualties.

Most real-life terrorists in the U.S. appear to be undisciplined or poorly trained or social misfits. Thus the question: How much worse would attacks be if carried out by terrorists who are well-trained, organized and seemingly ordinary? How much worse if terrorists rejected martyrdom and valued escape, to attack yet another day? Enter Stickman and Maple – well-trained, disciplined, blending in. Your next-door neighbors, sending up no red flags at airport security.

Prominent in the novel are Wilbur and Violet, he with early Alzheimer's. Stickman and Maple, on the run, rent a trailer house from the elderly couple, who provide a sometimes humorous, sometimes touching diversion from the bullets. As the law closes in, the terrorists eye yet another horrific strike as they prepare to flee – after dealing with Wilbur and Violet.

On goodreads, Skip said: "Blending In is one of those books you hate to put down, yet hate to finish reading because it is so engrossing."

On Amazon, David S. wrote: "In an age of escalating terrorism, Norman Brewer provides a stark vision of what our nation could soon face in this tightly written and cleverly plotted novel …"