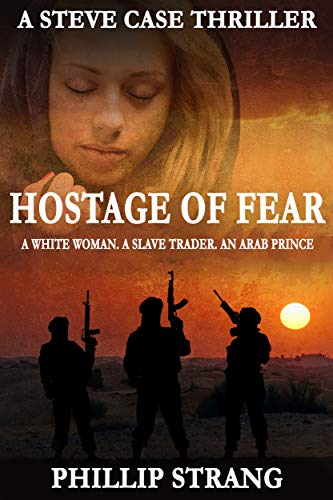 Book: Hostage of Islam - A White Woman. A Slave Trader. An Arab Prince. by Phillip Strang

about this book: Boko Haram is waging a war to bring Islamic fundamentalism and Sharia law to Nigeria. They have been successfully increasing their rule over large swathes of territory in the north-east of the country.

Christian schools, invariably female, have been attacked and the women taken. Most have been given to the Islamist fighters. Some have been sold across the border into Cameroon as brides. The prettier females have been sold to 'the trader', a Chadian Sheikh who would sell them into the Middle East as a concubine if the price is right, or else a brothel on the East Coast of Africa.

As their attacks become more brazen, the fundamentalists storm an American Baptist Mission.

Three Americans are to die – the Pastor and his wife Mary in a blazing chapel, and Duncan Nicholson, gunned down while trying to defend them. Two young females, Kate McDonald, an American blonde, grieving over the death of her boyfriend Bill on the night she was going to give up her virginity to him, and Helen Campbell, whose life had been troubled by drugs and selling herself to survive in the North of England, are taken by the attackers.

Kate is offered to a slave trader who intends to sell her virginity to an Arab Prince. Helen, to ensure their survival, gives herself to the leader of the raid at the mission and the murderer of her friends.

Steve Case and his team, the beautiful Yanny from Senegal, Harry Warburton, the reluctant English Lord, and Phil Marshall, the ageing laconic Australian, are tasked with bringing the women back.

Over a period of weeks, the location of both women is ascertained – Helen in the camp of Boko Haram, and Kate in the Sheikh's compound in N'djamena, the capital of Chad.

With the initially reluctant assistance, and later appreciation, of the Nigerian military's assistance, ambitious plans are put in place to rescue Helen and then to move into Chad to secure Kate's release.

A battle at the Sheikh's compound ensues to release the trapped Nigerian girls, a hectic rush back to the airport and a standoff at the airport for the release of Kate and Fatima.