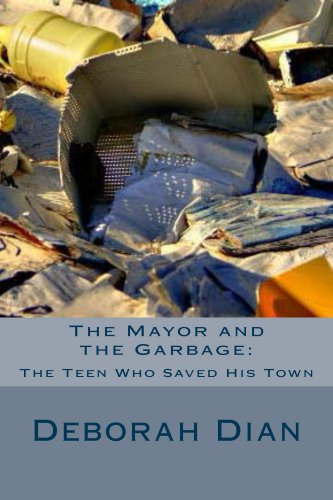 Book: The Mayor and the Garbage - The Teen Who Saved His Town by Deborah Dian

about this book: The water in the local creek seems to be killing the fish; two neighbors have died of cancer; a child in the tiny community of Sleepy has a serious illness. All these events worry 15 year old Mike DiMaggio, because he believes that the nearby landfill may be the cause. To make matters worse, his Dad works for the landfill, and does not want Mike to get involved. Against tremendous odds, Mike is still determined to try.

This novel was inspired by Brian Zimmerman, an 11 year old boy from Texas who became the honorary mayor of his tiny community of Crabb in order to improve the conditions in his rural town. Although Brian wasn't fighting a landfill, coincidentally about the same time, a Texas landfill burst into fire and burned for more than a month, releasing some harmful toxins. Between these two news stories, my novel for 9-15 years was conceived.

I wanted to write this novel because I wish to recognize teens, like the real life Brian Zimmerman, who are willing to dedicate their lives to improving their communities. There are a lot of good kids in this country.

In researching this book, I was surprised to discover how long a landfill fire can burn. I also learned a great deal about proper landfill construction ... and how corners were cut in a few older landfills built in the last century.

The cover art shows a lone boy walking in the woods, much as Mike DiMaggio sometimes does in the story. The book has received excellent reviews and praise, even from some of the children who have read and reviewed it.

Pre-teens and teenagers often feel that they cannot make a difference in the world. However, when they show that they have the courage to speak out and make positive changes, they can achieve more than even they realize. This story was written to encourage young people to realize they have the potential to change the world, or at least the world where they live.