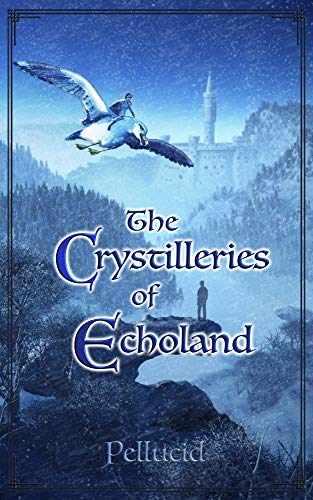 Book Review: The Crystilleries of Echoland by Dew Pellucid

about this book: The Crystilleries of Echoland won 5 book awards since its publication 3 months ago. What a great ending to a journey that began 12 years ago.

The idea for the magical world of Echoland began with a philosophical conversation. If our world was just a reflection of another world, a perfect world (the way Plato, the Greek Philosopher, had imagined), what might happen to us? Would we start to think that we were worthless by comparison? What if we started to think that we have no right to live after our perfect reflections died?

And so the world of the Echoes began, an Echo to our Sounds. Being a reflection world, it is see-through. And indeed, the Echoes are ruled by the Law of Death. And because free will has been usurped by chance, the Echoes worship Fortune in the shape of a crystal ball or the moon at night.

This is the setting for an unusual teen fantasy that ends in a murder mystery.

Looking forward to seeing you in Echoland!

This is a very unusual story. I reviewed the audio book version for Online Book Club. It is an extremely intricate tale, and while in some ways it is reminiscent of other young adult fantasy fiction such as The Chronicles of Narnia and Harry Potter with its plucky, outcast heroes and heroines battling magical foes, it is in no way a duplicate of either of those stories. In fact, it is like nothing I ever heard before.

The world built by the author is extremely intricate. A twelve-year-old boy named Will Cleary lives in a home overshadowed by the tragedy of his twin sister's disappearance ten years previously. Will was brought home on the back of a wolf with a falcon flying beside him. These creatures became Will's pets.

Will discovers the mysterious "gravestone book," which reveals the identities of children who have gone missing. Together with his wolf and falcon, he journeys to Echoland, where he meets his own Echo, the rightful prince of the realm. With new friends Peter and Valerie, Will and the prince work to take back the throne.

It is impossible to describe this story in a way that does it justice. It must be read, or listened to, to be understood. [by The Real Cie]