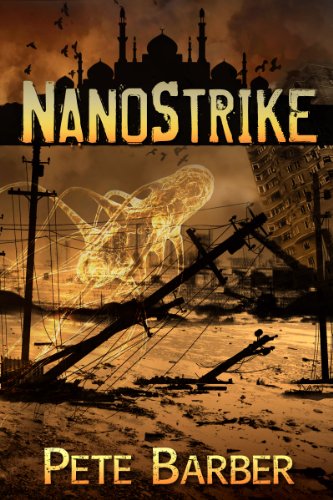 about this book: I wrote NanoStrike's opening scene a few months before the 7/7/2005 tube train attack in London. I traveled by underground for many years when I lived and worked in England. Unattended packages have freaked me out ever since! Originally the inciting incident was a suicide bombing. I shelved the idea for obvious reasons. Around 2011, I read an article about nanotechnology and it got me thinking that despite the massive benefit of building 'things' from their component atoms, that technology, because it could self-replicate, would make a terrifying weapon. And so the terrorist attack was changed, and a techno-thriller was born to explore "what if terrorists had a nanoweapon?"

Oddly, during the writing, I spent far more time researching the Hajj (Muslim pilgrimage to Mecca) than I did on nanotech. Dawud, the genius inventor of nanobots was a devout Muslim. When I took him on the six-day pilgrimage, he underwent a religious epiphany that changed him in a fundamental manner. It surprised me how strongly the rites at Mecca affected both him and me.

Here are a few Amazon reviewers' quotes to give an idea of how NanoStrike is perceived:

• Fast paced. Heart pounding. Couldn't "turn" the pages fast enough. I have never read a book with a storyline like this. — Sheri Barnholdt

• This book knocked my socks off! Read it ... You will understand the reference! — Ann H.B.

• I love Mitch Rapp, I love Tom Clancy. This book has only the good characteristics of both. — LeonInTexas

• I'm glad I picked up this book although it cost me a day. Hard to put down once started. — bach4me