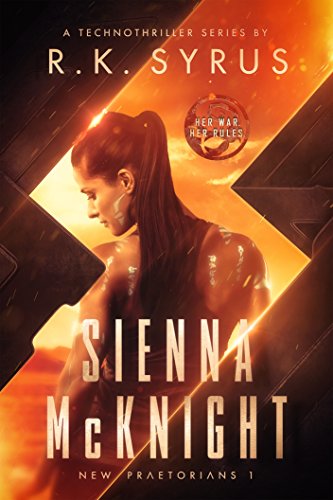 about this book: 2017: What an amazing year for female protagonists at the film box office. Who would have predicted Emma Watson would be crushing it in a Beauty and the Beat remake? Or that Wonder Woman would beat out Spiderman and Guardians 2? And to come there is still Rey in the next Star Wars.

If you like complex female action heroines like Ripley, Katniss, Rey, Sarah Connor, and Diana Prince, I'm certain you will find merit here. If you like the first chapter of book 1, you will almost certainly like this series.

What I am very pleased about is how the character of Sienna McKnight has developed in the first book of the New Praetorians series. I aimed for depth, versatility, book smarts (as a West Point graduate) and backwoods smarts (growing up in North Carolina). She's a multi-racial orphan brought up in America. And that's all before she acquires her super ability.

One inspiration came from the struggles of women in military service. For example, there is a true story of an Egyptian general who refused to speak with a decorated Lt. Colonel in the US Army simply because she was a girl. You can imagine who won that engagement.

New Praetorians also experiments with form. While this is mainly Sienna McKnight's story, each volume will have a focus character, reflected in the title. This is similar to the structure of the TV show Lost developed by J.J. Abrams.

Finally, I wanted a big rich world for Sienna to inhabit. With each volume it's developing:

Khorasan: a country created by the superpowers from a climate ravaged wasteland. It is sanctuary for the world's most desperate refugees.The massive and shadowy humanitarian agency which administers the young nation may have its own agenda.

The TYR Lens: a desalination plant the size of Manhattan Island floating in the Indian Ocean off the shores of Khorasan. Powered by biomass and solar energy, it supplies drinking water and electricity throughout the densely populated region all the way to the Himalayas.

The Lichstrom, EU: a corporate nation established on top of the privatized CERN supercolliders. The domain of Professor Chrysostomus Licht, it is the hub of the world's information systems. The carrier waves are neutrinos and photons of light. Lichtwerks Corp. products get under your skin, literally. Their injectable 'You ARE the phone' product is their latest upgrade.

An object. On Earth it is known as the Ansible. The glow it shines cannot be photographed, only seen. Inside its invisible, impenetrable, shell everyone sees something different.

Ten novellas tell one overarching story. Characters plot, scheme, kill, and strive for hope and redemption. They are moral and amoral, human and AI, and even a dark matter life form as vast as thought itself. These are the chronicles of the New Praetorians.

New Praetorians 1: Sienna McKnight: The decorated leader of a tightly knit Special Ops team plans the mission she has prepared for all her life. She struggles with rage and encounters a chance for hope and redemption.

THE SERIES: In a recognizable near future, Sienna McKnight obsessively pursues her mother's killer. Experiments performed on an alien artifact give her exceptional abilities. Her enemy, who is her cousin and a terrorist, also gains powers. She leads the fight over the fate of the world and the future of a unique orphan girl.