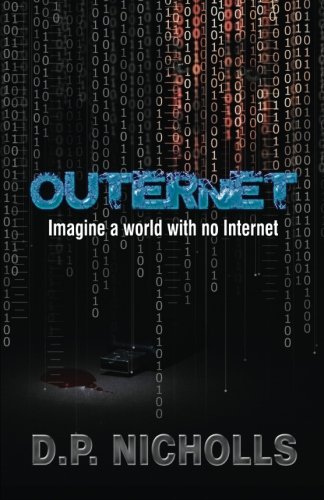 about this book: A few years back I posted a question on Linkedin, asking people what their lives would be like if the internet stopped working. The response was quiet interesting . The 'younger' generation, felt that their world would collapse asa against the 'older' generation who thought things would be a bit difficult, but, felt that maybe it wouldn't be a bad thing. Considering that this technology is only around thirty years old, the dependency we all have on this technology is frightening. 'IF' the internet was to be taken down, there isn't a plan B to deal with what would be catastrophic implications for society, and therefore OUTERNET was created.

Roland Bouverie is a media mogul whose tentacles spread worldwide. Long ago he avoided the temptation to join the internet generation and is now finding that his business empire is in serious decline and decides to now take down this technology. He has the money and the determination to do so, irrespective of the outcome. This, he feels, is personal. The global ramifications for this relatively new technology is immense, with very few avenues of civilization not affected. Does society really know how to cope without the internet?

The question poised by this book is whether the internet has proved to be beneficial to society and what would we do, if this technlogy no longer exists.

Great timing and a great read

I thought this book was an excellent read and certainly appropriate timing for this technological age we live in. It made me realise how dependent we all are on the internet and it's quiet scary to realise what would happen if it was taken down by cyber hackers. This isn't a book for geeks but a good old fashioned thriller, with all the elements you need for a great read. [by Jonothan Marks]