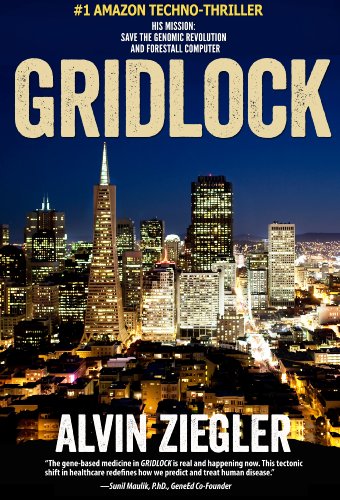 about this book: Jude Wagner plies his computer genius to accelerate a world computer. The result helps interpret the human genome. At once, the dream of personalized medicine becomes reality, bringing hope to millions of patients. The cause took hold of Wagner after his mother died from breast cancer.

But rapid modernization triggers violent backlash. Wagner's colleagues are dying. He's hurled into a race to save the person closest to him and prevent catastrophic GRIDLOCK.

Based on actual science, GRIDLOCK explores the clash of cutting-edge medicine with corporate dominance-forces which are quietly battling with real life consequences for us all.

• "Do not be put off by the scientific/medical leanings of this book. It is a superb Action thriller. Great characters and a great plot that happens to use modern science as it's base story. I can't recommend this highly enough." — Amazon U.K. Reviewer, N.C. Roff

• "Alvin Ziegler's GRIDLOCK is just what the Dr. ordered for any reader looking for a fast-paced thriller that features hard science and up-to-the-minute medical research. Give this a read! You won't be sorry." — Seth Harwood, Author of JACK WAKES UP

• "The gene-based medicine in GRIDLOCK is real and happening now. This tectonic shift in healthcare redefines how we predict and treat human disease." — Sunil Maulik, P.hD., GeneEd Co-Founder

• "GRIDLOCK: A Scientific Thriller is a very stimulating and electrifying novel. I love how it ended and wouldn't change a thing about it even if I could. Recommended to everyone who wants to read action thrillers and is interested in new breakthroughs in the medical field. Five Stars." — READER'S FAVORITE BOOK REVIEWS