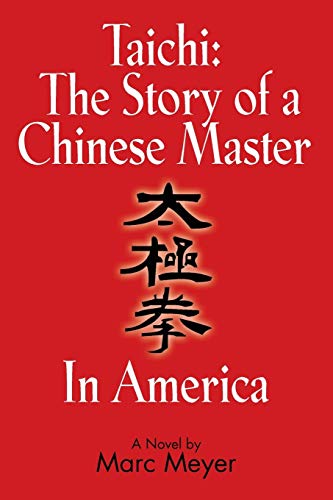 Book: Taichi - The Story of a Chinese Master in America by Marc Meyer

about this book: The novel "Taichi: The Story of a Chinese Master in America" tells the story of a man who leaves China in the early 1960's to open a T'ai Chi school and reconnect with his Asian American family in Chinatown, New York City. He was once the bodyguard of Mme Chiang Kai Shek. This is the first and only fiction novel of it's kind about T'ai Chi Chuan. It's bright red cover spells out the words T'ai Chi Chuan in Chinese pictograms. The novel is an absolute must read for lovers of martial arts and Asian American fiction alike. It was inspired by the legendary T'ai Chi grandmaster Cheng Man-Ching and his American students during the period of the 1960's in New York City. It tells of a time, years before the advent of Bruce Lee movies, when the Kung Fu art of T'ai Chi Chuan was first introduced into the United States and was secretly practiced only in small enclaves of America's Chinatowns. I'm Marc Meyer the author of this book and I have been practicing, teaching and studying the art of T'ai Chi for the past eighteen years.

The novel has received critical acclaim from Matt Polly, author of the bestselling New York Times reviewed books "American Shaolin" and "Tapped Out". Polly praised the book for it's addictive storytelling, realistic characters and authenticity.

Phil Jason, reviewer and critic for Florida Weekly Newspaper calls Taichi "A detailed, entertaining look at the workings of an imposing physical and spiritual discipline that will keep you engaged and in awe."