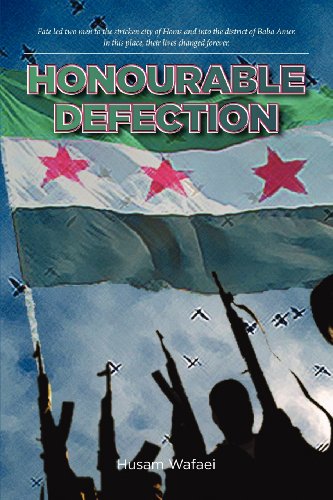 about this book: Honourable Defection is about the early days of the Syrian Revolution in the Arab spring. It is a story about two soldiers who defected from the regular Syrian army, because they refuse to kill civilian people. It is a story about love, compassion and patriotism. Over four decades of tyranny, dictatorship and oppression dominated the Syrian people under the shadow of the Assad's regime, who inherited the presidency from his late father Hafiz al Assad. Over half a million people were incarcerated since the Assad took power in 1970, and in 1982 forty two thousand people were killed in less than ten days in the city of Hama, which dared to challenge his authority. The country was dominated by fear, intimidation and threat. In March 2011, a group of public school students in the city of Darra protested against the regime on their school blackboard, and consequently they are imprisoned, tortured and returned to their families. This was the spark which was long overdue to start a peaceful uprising through street demonstrations. The Assad regime responded by the use of lethal and brutal forces against unarmed civilians, which led eventually to numerous defections from the Syrian Armed Forces.

I was inspired to write this book, when I accidentally met with some early refuges from Syria, and consequently I was drawn to know more about the characters and the people involved in this real life drama. I was motivated to do something that will effectively convey the suffering of the Syrian people to the rest of the world, since I am a veteran of the Canadian Forces for over twenty years, where I served on international campaigns such as Bosnia, Gulf War, Rwanda, Bosnia and other UN and NATO mission, I became very aware with first hand experience how human suffer in every conflict, but never thought the same will reach the country I grow up in. In any conflict, ultimately civilians are the first causalities.

It did not take long to write the book, only eight months while I was conducting interviews and cross referencing some media sources, and completing historical research for facts and figures. I found that the hardest thing about writing my book was the verification of cross references, and filling the gaps through dramatic projection of the story without loosing the substance or intended purpose of the message, yet I enjoyed the experience as a whole since I was driven by an obvious motive to relay to others the plight of free Syrians.

I found the book title "Honourable Defection" as a natural descriptive to the content of the story. Defection from any armed forces always viewed in a negative way, however in cases as this one, defection for a higher cause for freedom, democracy and dignity. This would seem very appropriate to describe the dilemma of these soldiers, who let their morality for the good to influence a very dangerous decision when they decided to defect.

The cover of the book was also an inspiration of the early days of the revolution, when fear was still dominant and defection and talk of freedom were veiled behind the conscious of many, and at times it was not clear how the uprising and the revolution will lead Syria into the next step. The cover is simple, to convey fear, unclear images and yet warning of times to come, that eventually the struggle for freedom will gain momentum regardless of the Assad attempt to crush the uprising.

I have learned from this experience how human's resilience will persevere when there is conviction of justices, I have learned that the only thing between anyone and a story is their ability to maintain self discipline and stay focus objectively, even though interpretation of events sometimes was biased. Convey your message to the best of your ability, and always if you are writing about real characters or real people, to put yourself in their shoes and view the world from their perspective. I also learned that writing is an addictive process, that draws you into it to finish what you started.